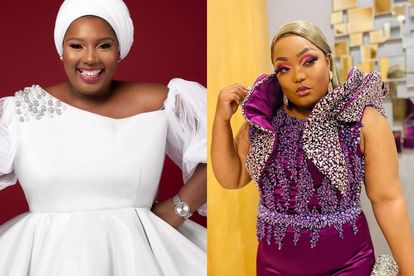 ‘Real Housewives of Durban’ is heating up with LaConco and MaKhumalo. Images via Instagram @_laconco @thobilek.

‘Real Housewives of Durban’ is heating up with LaConco and MaKhumalo. Images via Instagram @_laconco @thobilek.

The Real Housewives of Durban (RHOD) is trending on Twitter because Tweeps think Nonkanyiso “LaConco” Conco is encouraging hate against Thobile “MaKhumalo” Mseleku after the latest episode today (18 February).

LaConco spoke to Mabusi Seme and Londie London about MaKhumalo’s black tie event. The reality star was not impressed with how long they had to wait for MaKhumalo’s grand entrance.

While at the event LaConco commented on the polygamous marriage that MaKhumalo and Musa Mseleku share. MaKhumalo was surprised because the businesswoman was engaged to marry former President Jacob Zuma who is also a polygamous.

The businesswoman on the other hand thought MaKhumalo was not genuine.

“I am friends with MaYeni, the second wife. When I arrived at the Mseleku household she welcomed us, she was very bubbly. I was still working at Vuma FM she came for an interview. She was very cold, it was as if I was not in the same room, gosh, I was shocked because not so long ago. I saw her  at the wedding and I wondered if she’s the type that is only friendly when there are people around. So it means she was not genuine,” she said.

“I want to have a conversation with her and tell her that I am not going to be her fool,” she continued.

TWEEPS REACT AS THE PAIR TREND

LaConco is trending on Twitter because Tweeps thought that she was encouraging Mabusi and Londie to hate MaKhumalo.

“Does Laconco have an idea how much we love Makhumalo? She better come correct or else o tla mbhora fast #RHODurban,” tweeted @Queen_Pardo.

“(She) is trying to be relevant with Makhumalo… haibo gogo we still waiting for the full Zuma content phela,” tweeted @Promise_Mrs_Law.

“Is LaConco hotspotting people to hate on MaKhumalo? She clearly doesn’t like her,” tweeted @rendani_rendz.

Others defended LaConco. Take a look…

“I don’t get how people are saying Laconco is recruiting people to dislike MaKhumalo whereas she was just telling them the story of why she doesn’t get along with uMaKhumalo,” tweeted @seh_clements.