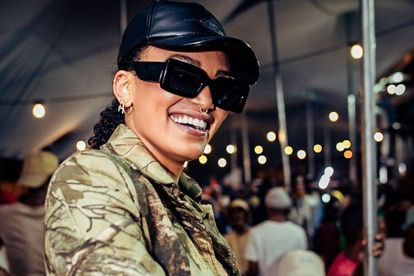 Pearl Thusi is spending the next few days in Dubai….and so is Muvhango hottie Gabriel Temedzani

The actors have been romantically linked by tweeps after they both revealed they were in the same country. This, after Pearl Thusi called off her Valentine’s Day date with Twitter personality Mr Smeg…

According to rumours started by a handful of tweeps, Pearl Thusi is reportedly hooking up with Gabriel Temudzani in Dubai.

The soapie star is celebrating his 42nd birthday with a group of his closest friends during his trip abroad.

Earlier this week, Pearl Thusi revealed that she would be postponing her date with Mr Smeg – real name Michael Bucwa – as she was forced to travel out of town for a week.

Hours later, she revealed she had touched down in Dubai.

Enter “Twitter detectives” who begin a wild rumour that the pair are actually on a secret rendezvous.

Upon spotting the tweets, Pearl Thusi responded with a series of laughing face emojis.

On her own Instagram page, Pearl posted pics and clips of herself in Dubai, joined by close friend Babalwa Mneno.

Gabriel, has also updated his followers of his adventures on Instagram, revealing that he had spent Valentine’s Day at tourist attraction Dinner In The Sky, with a group of friends.

A MESSAGE FOR MR SMEG

Meanwhile, Pearl Thusi has warned Mr Smeg not to watch her new Netflix movie Wu Assasins Fistful of Vengeance, which comes out on Thursday, 17 February.

The star has been promoting her new Netflix production and is encouraging her followers to set their reminders….except for Mr Smeg, of course.

According to Pearl, the movie contains an explicit sex scene with one of the lead male characters.

When one tweep asked if Mr Smeg should watch his bae’s latest offering, Pearl responded: “Probably not.@MichaelBucwa you should probably not watch the movie coming out tomorrow. Or when you see me kissing someone just close your eyes”.