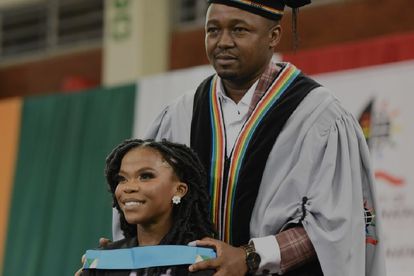 Singer Nomfundo Moh was awarded a double-platinum plaque during her graduation at UKN. Image via @ukzn/Instagram

Singer Nomfundo Moh was awarded a double-platinum plaque during her graduation at UKN. Image via @ukzn/Instagram

Nomfundo Ngcobo, popularly known as Nomfundo Moh, received the surprise of her life when the University of KwaZulu-Natal played her new song Soft Life as she walked the graduation stage on Saturday 14 May.

But that was not all as the 21-year-old who graduated with a Bachelor’s Degree in Social Work was also awarded a double-platinum plaque at the ceremony held at the university’s Durban Westville Campus.

DEGREE IN THE BAG!

It was excitement all-around at the UKZN graduation ceremony as students sang along to Nomfundo Moh’s chart-topper Phakade Lami – a song about missing the love of one’s life.

The 2021 lover’s anthem, which features singers Ami Faku and Sha Sha, has amassed more than nine million views on YouTube.

As the musician walked over to get conferred, she broke out into song when her new track Soft Life was blasted on the loudspeakers.

Her new song ties beautifully into the moment as it speaks of getting doors opened to make one’s dreams come true in pursuit of a “soft life”.

However, that was not all for the KZN-born musician who was also awarded by her management with a platinum plaque shortly after. The award was for her song Phakade Lami which has gone double platinum (40 000 units sold).

“The song Phakade Lami went gold two months ago. I wasn’t expecting it to go double platinum already. I am so happy,” she told IOL.

About studying social work, she said she decided to pursue a career in the field because her aim is to be there for others.

“I am truly humbled by the love shown to me by my team and fans on the graduation stage. Completing my degree proves that I can achieve whatever I put my mind to. Thank you to everyone who believed in me. To the people, my MohFam, thank you for buying the music, thank you for the love you keep on showing towards me and the art,” she said.