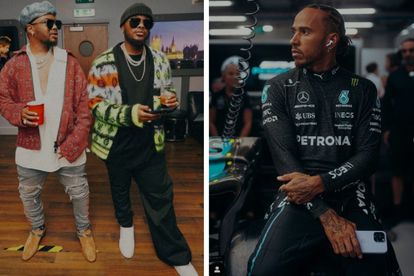 South African musical duo the Major League DJz, made up of twins Banele and Bandile Mbere, have fans asking a lot of questions following their video with seven-time Formula One champion Lewis Hamilton.

A video posted by the amapiano DJs on Twitter on Tuesday 18 October shows the artists in the studio with the F1 driver.

“Hanging out with our bro @LewisHamilton in studio… connecting the dots…” they wrote.

Assuming Lewis Hamilton and the Major League DJz are working on music together.

In July, the British driver joined the amapiano fan club when posted an Instagram reel which was accompanied by one of Mzansi’s most popular tracks by Musa Keys titled Selema (Po Po) featuring Loui, from the amapiano star’s debut album, Tayo.

In an Instagram reel, the Mercedes driver put together a reel from his high-intensity weekend at the French Grand Prix where he placed second behind Red Bull’s Max Verstappen.

In addition, Lewis Hamilton is also a musician. In 2018 he featured on Christina Aguilera’s song titled Pipe under his alter ego XNDA.

“I had this incredibly beautiful and talented person reach out to me a while back asking for me to be on her album, I was so blown away and I jumped at the opportunity. I had two houers to write the short verse and record,” Lewis Hamilton wrote on Instagram in 2020.

“The goal was to have the music come out under a different name so that you could hear the music first and later know it was me but it didn’t work out the way id planned. I shied away from acknowledging it was me, I don’t know why, maybe Insecurities, fear, overthinking, something I think many people can relate to.

“Well I want to say that XNDA is me.”