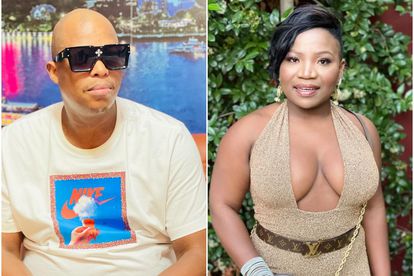 Makhadzi has reacted to a viral rumour claiming she has bedded Babes Wodumo’s husband Mampintsha – and her response is hilarious!

The Limpopo-born singer has waded into the social media storm after Babes accused her of going after man in a trending Instagram Live rant.

And Makhadzi was not holding back either – shading both Babes and Mampintsha in her reply!

Following Babes Wodumo’s alleged drunken rant on Monday night, Makhadzi posted a cryptic post on her Twitter account. And many believe it is aimed at the high profile couple.

She tweeted in Tshivenda: “The man of that girl from Durban [Babes Wodumo], I don’t think he  [Mampintsha] can satisfy me. I’m saying this by just looking at him. I think maybe this is a stunt”.

In another tweet Makhadzi addressed the rumour head-on, this time claiming her boyfriend – rumoured to be Jerusalema hitmaker Master KG – would not be impressed with the viral claims.

She tweeted: “Imagine my boyfriend hearing that I am trending for another. Just because someone wants to pull a stunt by mentioning my name . But I forgave her already. And also replied to satisfy her. Goodbye”.

Makhadzi was no doubt responding to an earlier rant by Babes Wodumo about her this month, in which the gqom singer insulted her personally and professionally.

Whilst his wife was busy trending on Twitter over her viral video about Makhadzi, Mampintsha was out and about minding his own business.

The music producer took to his Instagram Stories to reveal how he treated his family to a delicious lunch at a restaurant. He also indulged in some self spoils by having a foot massage and pedicure.

Babes, meanwhile, was nowhere to be seen!