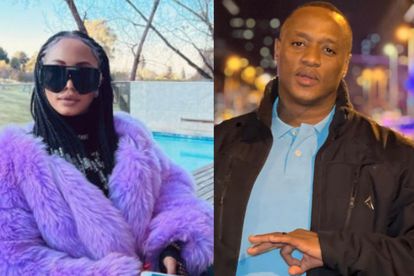 South African singer Kelly Khumalo reacted to her “baby daddy” Jub Jub’s controversial interview on Podcast and Chill with MacG on the latest episode of her Showmax reality show which released on Tuesday 12 July.

JUB JUB CALLS OUT KELLY KHUMALO ON ‘PODCAST AND CHILL’

Kelly Khumalo and TV host Jub Jub share a 12-year-old son named Christian together. The singer has previously expressed that Jub Jub has made no efforts to be apart of Christian’s life.

However, Jub Jub leaked an audio clips between himself and the singer during his interview on Podcast and Chill with MacG.

“Please, I need my boy. The boy needs his father and please can we meet at your soonest convenience… and we can address the issue of the boy and any other issue that you wish to address. I want to put our differences aside for the sake of the boy,” he said in the clip.

This made many believe the former Uyajola 9/9 host was making an effort but Kelly was not allowing him to see her son.

It was the same episode of Podcast and Chill where Jub Jub said he “smashed” actress Amanda du Pont. She later made the bombshell allegations that he raped her for two years. So, this may have just been the most controversial episodes of the podcast for the year.

THE SINGER REACTS TO THE CONTROVERSIAL INTERVIEW

Kelly addressed the controversial interview on the latest episode of her podcast. She said that she was made to look like a “monster” standing in the way of her child’s relationship with his father. However, she claimed that she Jub Jub was the one who never made an effort.

“I’ve been tried, I mean podcasts. You know certain things that are meant to prove me as a monster that never wants to allow her son to have a father,” she said.

“But how do you allow someone who’s never made an effort?” she continued.