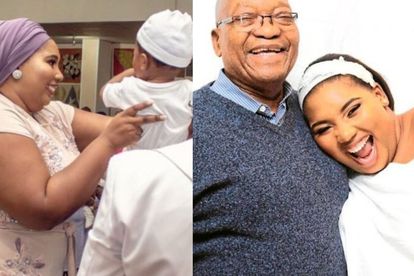 South African reality star Nonkanyiso “LaConco” Conco thanked her “baby daddy” former president Jacob Zuma for a little gift via her Instagram Story which was shared on Twitter on 29 June.

LACONCO THANKS ‘BABY DADDY’ FOR HER LITTLE GIFT

Nonkanyiso “LaConco” Conco may have led Tweeps to believe she is still in a relationship with her “baby daddy.” Although she did not mention names, LaConco is known to have just one child and that is with former president Jacob Zuma.

A Tweep claims she shared an Instagram Story where she thanked her “baby daddy” for the small and big gestures, which included the grey gown she was wearing.

“Even the small gestures need to be thanked, and the big ones as well. Thank you baby daddy for this gown,” she wrote.

WHAT HAPPENED BETWEEN THE REALITY STAR AND FORMER PRESIDENT?

It’s been such an emotional journey,” she said to co-star Sorisha Naidoo before she burst into tears.

“The position I am in… I found love and I stayed true to that love. But unfortunately, there were people who had an interest in that love and made it a public thing when it was not my intention,” she continued.

“No one gets into a relationship, especially if you are young, to face circumstances that I went through. I had to come to a point where I had to accept the situation and these are the circumstances. Okay this is it,” she added.

LaconCo also said she would always respect “that man” (Zuma).