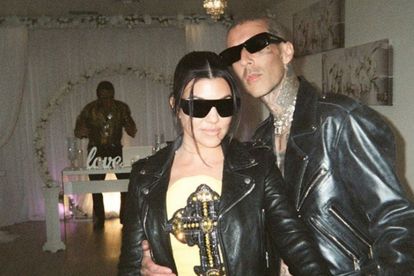 TMZ reported Kourtney and Travis walked into One Love Wedding Chapel around 01:30 Monday and tied the knot. This was just hours after Travis performed live at the 64th annual Grammy Awards on Sunday 3 April.

The pair reportedly did not allow the venue to take any pictures but instead brought their own photographer and security. This follows the Blink-182 drummer’s romantic beach proposal back in October 2021  – which is featured on the family’s new Hulu reality show The Kardashians.

The sudden Las Vegas wedding came as a shock to many but Kourtney revealed that it was more of a “practice wedding” without a marriage licence via an Instagram post on Wednesday 6 April.

“Found these in my camera roll. Once upon a time in a land far, far away (Las Vegas) at 2am, after an epic night and a little tequila, a queen and her handsome king ventured out to the only open chapel with an Elvis and got married (with no licence). Practice makes perfect,” the post was captioned.

WEDDING NUMBER ONE FOR KOURT, THREE FOR TRAVIS!

This may be the Poosh founder’s first marriage but this would be Travis’s third marriage. Travis was married to Melissa Kennedy for just nine months before they divorced in 2002. About two years later he married Shanna Moakler in 2004 but the pair split in 2008.

Shana and Travis have two children together – Landon (18) and Alabama (16) but he also took care of Shana’s daughter Atiana De La Hoya. This was from the model’s previous relationship with Oscar De La Hoya.

Kourtney may not have been married but she has a very public on-and-off relationship with socialite Scott Disick, who was featured heavily on Keeping Up With The Kardashians. The pair have three children together – Mason (12), Penelope (9) and Reign (7).