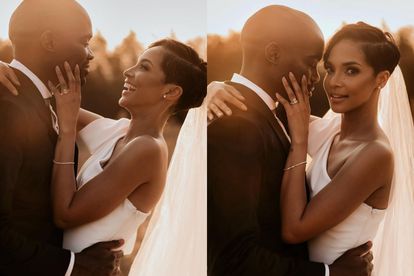 THE WHITE WEDDING TOOK PLACE ‘ABOUT A MONTH AGO’

If there is one thing about Liesl Laurie-Mthombeni and Musa Mthombeni, they will only let you know what they want you to know. The couple surprised their fans and followers with pictures of their white wedding for the first time today (18 September). A whole month after it took place.

The term “white wedding” originated in Great Britain as a formal or semi-formal wedding with “white” originating from the colour of the dress. Although Liesl and Musa announced their traditional wedding with pictures on 21 August, the pair actually had their white wedding on 18 August.

PHOTOS OF THE WHITE WEDDING

Liesl and Musa each posted a single photo from their wedding today, which marks a month since it took place.

THE BALANCE BETWEEN PRIVATE AND PUBLIC

While the newly weds cute Instagram stories would have you thinking you’re kept in the loop about their lives, the pair always have something up their sleeve! It is no surprise as they managed to keep their relationship a secret for almost a year before going “Instagram official”.

The couple only went “Instagram official” after Musa officially put a ring on Liesl’s finger back in June. The Vital Signs host whisked the former Miss SA off to KwaZulu-Natal for a romantic proposal at the top of a mountain.

The former YoTV star previously mentioned that Liesl threw him a surprise birthday party before they were “Instagram official” and he ordered his friends not to let her shoulder be seen in the pictures.

“My friends were threatened within an inch of their lives not to even post the shoulder of my now fiancée,” wrote Mthombeni.

“Thank you for obliging dear friends. Also your invites and presence at this party will now exclude you from the wedding. Give other children a chance. Thanks,” he continued.

Even though they’re official now, the couple are still able to keep some things private. The pair had a “minimoon” resort hopping in the picturesque Western Cape. They started their “minimoon” in Hermanus and ended in Cape Town.