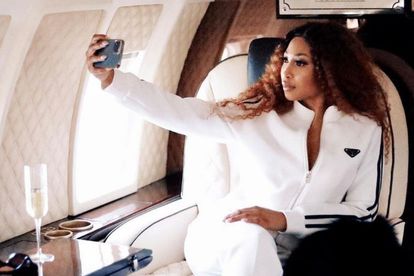 South African actress Enhle Mbali Mlotshwa released a 26-minute documentary based on her life as a newly “healed woman” via Instagram TV on Monday evening 13 September.

The Rockville star opens up about life as a newly healed woman in her new documentary, which she prefers to call a “conversation”. She talks about growing up alongside strong women whom has shaped her journey of healing. She also briefly gets into her co-parenting relationship with her ex-husband DJ Black Coffee.

Black Coffee and Enhle Mbali have two sons together: Anesu and Asante.

The documentary was teased in mid-August. The actress expressed that this serves as closure to her marriage and the pain it caused her as she has healed.

However, she had a different approach earlier this year. In May, the actress took to Instagram with an emotional video saying she is no longer protecting Black Coffee and will be holding a press conference, bringing all the “receipts” of his lies. This was after she was denied a protection order against the Your Eyes hitmaker.

From the abuse allegations against Black Coffee to her response to being labelled a gold digger; here are three things to expect from Enhle Mbali’s documentary.

The actress speaks about the abuse allegations she made against Black Coffee in March this year after he allegedly physically abused her at her birthday party. She refers to Black Coffee as a “problem” as images of headlines surrounding the incident and her divorce appear on the screen.

“I’ve heard a lot about who Enhle is but none of that is my narrative. I am not an angry black woman. I am, however, a woman who had to stand for herself. This problem came to me. While I was home relaxing, celebrating myself with friends, this problem came to me and when I fight this problem, the problem becomes a victim,” said Mlotshwa.

She went on to say that it disappoints her that the truth is not investigated and she was denied a protection order. However, she claims that she has “healed” from this.

2. SHE ADDRESSES BEING LABELLED A ‘GOLD DIGGER’

Enhle Mbali said that she has been labelled a “gold digger” but she goes on to say that she is no gold digger, she helped build Black Coffee. She added that she made personal sacrifices for their marriage to work.

“Walking on to sets where everyone has a perception or a narrative of me that simply isn’t true. I am not a gold digger. I found a man who had opportunity in his mind and we made a decision to build together and now he is built,” said Enhle.

“I agreed to take parts of my life that were so important to me and put them aside to make this work. To make forever work and it didn’t,” she continued.

3. SHE HAS STARTED DATING

The Rockville star said that although she is not ready for a relationship as yet, she has started dating. She added that she is loving having men “marvel” over her.