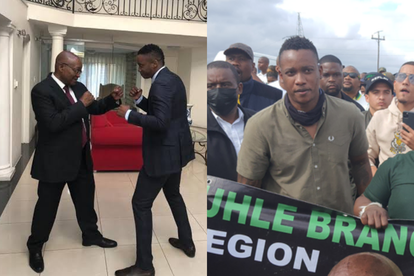 At first, many people assumed Duduzane Zuma, the son of former president Jacob Zuma was joking when he announced his bid to become president of South Africa. People however are no longer laughing as Zuma’s son is dead serious and already embarked in full swing on his presidential campaign.

Duduzane Zuma serious about giving Ramaphosa a run for his money

In 2020,- South African businessman Duduzane Zuma announced his plans to “bring something different” to the country’s political sphere as a presidential candidate. Because of his father’s controversial run as the country’s president between 2009 and 2018, many people were not sure whether or not he was serious.

Despite his father being found guilty for defying the Constitutional Court and subsequently getting detained, Duduzane seems to be going ahead with a presidential campaign that involves door-to-door visits with food parcels and social media clips of himself promising his fellow South Africans a brighter future.

“When it comes to competition, I’m not looking at anybody else. I’m not here to compete. I am here to do something different.

“If you’re saying I’m competing against someone it means we walk on the same path. I’m walking a completely different path. We’re going to do things differently and there’s no-one in that lane. That’s a lane I’m creating because I believe that’s the only way we’re going to overturn and overhaul the situation through the ANC,” he said during an interview with Newsbreak Lotus on 7 August this year.

In fact, the Daily Maverick reports that the son of JZ has even busied himself with rallying Indian business owners in helping him secure funds for the campaign, as well as the food parcels he has been seen “blessing” the less fortunate with while also discussing the recent unrest in KwaZulu-Natal.

Mzansi reacts to his efforts

Duduzane has since found himself trending on Twitter as people discuss his efforts to win the people over with his presidential campaign efforts.

While it appears some people are excited to have a “younger generation” taking control of the country’s trouble-riddled politics, others are not as eager to watch it happen especially since he was recently accused of instigating violence and encouraging looting during South Africa’s nationwide unrest.

“Duduzane Zuma’s presidential campaign has begun. I would love it if a young person were to lead this country. Any young person for that matter. Maybe things will turn out good who knows.”

“I will VOTE for Duduzane Zuma…or any young person in SA its what we need now!”

“Madness is when Someone thinks Duduzane Zuma can be a president.”

“Y’ALL are against Duduzane Zuma’s Presidential campaign while you have people like Fikile Mbalula as ministers. The joke is on you.”