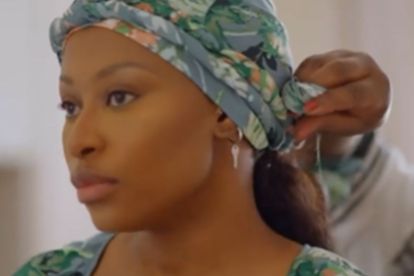 DJ Zinhle reveals that she is married. Image via Instagram @betafrica.

DJ Zinhle reveals that she is married. Image via Instagram @betafrica.

South African DJ Ntombezinhle Jiyane, popularly known as DJ Zinhle, revealed that her “baby daddy” Murdah Bongz’s family came over to her home for the lobola negotiations on the first episode of the second season of her reality show which aired on BET Africa on 6 August.

The first episode of the second season of DJ Zinhle: The Unexpected aired on 6 August and the businesswoman dropped a bombshell – She’s married! The Umlilo hitmaker revealed that her “baby daddy” Murdah Bongz wants to be called “husband.”

The businesswoman and Murdah Bongz welcomed their first child together in September 2021 – Asante Mohosana. Asante is both DJ Zinhle’s and Murah Bongz second child. The DJ has seven-year-old Kairo Forbes with rapper AKA and Murdah Bongz also has a son from a previous relationship.

“Bongani wants to be served husband. He doesn’t want to be called boyfriend anymore. There has been a lot of changes since you guys last saw me,” she said.

So, DJ Zinhle explained that six months ago Murdah Bongz and his family came over to her mom’s house for their lobola negotiations. She said that they wanted something small and lowkey and clearly saved the news for her reality show!

“Bongani and his family came to my mom’s house to negotiate lobola. And we decided that it should be a small thing, with just family,”  she continued.

ALSO READ: Here’s what to expect from ‘DJ Zinhle: The Unexpected’ season two

DJ Zinhle then revealed that she never wanted to get married because she was never with anyone she wanted to marry. However, she and Murdah Bongz talked things through and she said that she is now his wife.

“I just never had ambitions to get married. I never wanted it, I never felt like I was with anyone I wanted to marry but Bongani and I spent a lot of time talking about it thinking about what we want to do,” she said.

DJ Zinhle said that she loves telling people that she is married.

“I’m excited to be his wife, I’m excited to try something I never would of thought would happen for me. So now I’m married and I love telling people that,” she continued.