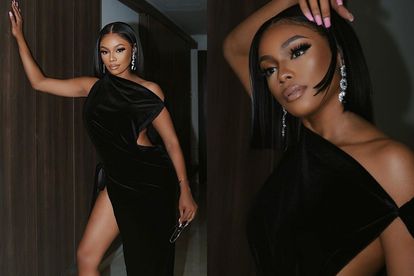 South African-born media personality Bonang Matheba has revealed that she is dating an American guy for over a year and four months in an interview with Drum on Wednesday 13 April.

BONANG REVEALS SHE IS DATING AN AMERICAN GUY

Bonang was rumoured to be dating rapper Siyabonga Nene, popularly known as Big Zulu, in March. This was after a video of the pair seemingly flirting went viral on Twitter. Take a look…

Queen B further fueled rumours by posting that a Zulu man will sweep you off your feet.

However, the media personality revealed that she does actually have an American boyfriend in an interview with Drum. She said that they have been dating for about a year and four months. Bonang “indefinitely” relocated to New York in June 2021.

“I have been dating my American guy for about a year and four months now,” she said

Bonang has her happy glow on but the media personality is not ready to post her bae just yet.

“But I just feel, the last time I introduced someone to my fans and followers, things just went pear-shaped. Showing my relationships has never benefited me in any way. It has brought me worse than good, and I learned that the hard way. I feel like I make more money when people don’t know who I am dating. But I am happy in this relationship. You can see my happiness in my glow and ake shoti ka nex,” she continued.

“Just because it’s not on Instagram, doesn’t mean it’s not happened. My fans don’t love it when I keep secrets, but I have been burned in the past and I am being careful,” she added.

ALSO READ: ‘It is my brand, my heart and soul’: Bonang on House of BNG legal battle

QUEEN B: ‘I’M STILL VERY MUCH A NEW YORK GIRL’

Bonang returned to South Africa in December 2021. So, fans were wondering if she is staying in Mzansi or going back to New York and it seems the Big Apple it is! She said that she will be returning to New York in a matter of days.

“For people like me who relied on live shows, concerts, and such, we were affected by Covid-19 and it feels good to be back in front of a live audience, doing what I love. I am home, but I am still very much a New York girl. I will be going back in a couple of days,” she said.

Many fans were wondering what she was getting up to in the Big Apple. She revealed she was working while in the United States.

“I was working. People tend to think that when they don’t see what it is that you are doing, you are not busy, but I have many surprises on the pipeline,” she said.

Bonang went on to describe New York as “cut-throat.”

“New York is tough. It is cut-throat and lonely, but I love the challenge. The US is massive, and everyone is trying to make it. They are also the crème de la crème of entertainment, they created it. It’s the heaven of showbiz. I did not get there and become the Bonang that is known in my country and continent. I needed to work to prove myself all the way to the top. The experience has been different in many ways,” she continued.

Regardless of her travels, Queen B still loves Mzansi.

“We have some amazing and unique things about us that make us stand out and home will always be close to my heart. It birthed me into my brand and the person I am today,” she added.