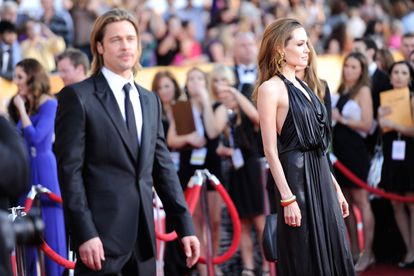 (FILES) In this file photo taken on January 29, 2012 actors Brad Pitt and Angelina Jolie arrive at the 18th Annual Screen Actors Guild Awards at The Shrine Auditorium in Los Angeles, California. – Brad Pitt has accused his ex-wife Angelina Jolie of seeking to “inflict harm” on him by selling her stake in their French vineyard to a Russian oligarch with “poisonous associations and intentions.”
Image by KEVORK DJANSEZIAN / AFP

(FILES) In this file photo taken on January 29, 2012 actors Brad Pitt and Angelina Jolie arrive at the 18th Annual Screen Actors Guild Awards at The Shrine Auditorium in Los Angeles, California. – Brad Pitt has accused his ex-wife Angelina Jolie of seeking to “inflict harm” on him by selling her stake in their French vineyard to a Russian oligarch with “poisonous associations and intentions.”
Image by KEVORK DJANSEZIAN / AFP

Angelina Jolie has clapped back hard at recent comments made by ex-husband Brad Pitt, accusing him of spreading a “false narrative”.

Representatives for the actress have responded after Pitt accused her of trying to “harm” his reputation.

Angelina Jolie and Brad Pitt parted ways in 2016 after two short years of marriage. Their public split was marred by a lengthy legal battle over child custody and asset, which are still ongoing. Brad Pitt was even accused of domestic abuse and has been investigated by child services amid allegations of physical violence toward their six children.

Last week, Brad Pitt filed complaints against Angelina Jolie after she sold her share of their French Miraval winery in October 2021 without his consent.

Brad Pitt’s lawyers argued that the move was “unlawful” and is requesting a trial by jury.

According to US Weekly, court documents allege that Angelina sold her half of the business to a buyer who has since “launched a hostile takeover,”  which has “destabilised the business and tarnished the brand’s reputation”.

Brad Pitt’s lawyers allege: “All of this is the direct result of Jolie’s unlawful and tortious conduct. In violation of the parties’ agreement, Jolie has sought to force Pitt into partnership with a stranger, and worse yet, a stranger with poisonous associations and intentions.”

On Wednesday 8 June, a representative for Angelina clapped back at the comments made by Brad Pitt.

They told People magazine: “Mr. Pitt’s lawsuit against Ms. Jolie is an extension of a false narrative, and the truth of the situation has still not been made public.

“It’s unfortunate that after she properly and legally exited the business, Mr. Pitt is entangling her in multiple lawsuits.”

Hot on the heels of Johnny Depp vs Amber Heard’s courtroom showdown, social media users are calling out Brad Pitt for demanding a trial by jury.

Many tweeps allege that the actor is hoping to use his money, influence, and female fans to sway the “court of public opinion”. Tweeps are also suggesting that the idea emanated from Johnny Depp’s $15 million judgment win over Amber Heard last week

@eternallyraquel: “Trial by jury…I wonder where Brad Pitt could’ve got this idea? Why is the ramping up the harassment now? What could have happened in the last few days that could’ve emboldened him? He was waiting to see how the trial went to go after Angelina Jolie again”

@momvoiceyoume: “Brad Pitt is seeking for the world to punish his ex. A woman doing the right thing & protecting her kids & her own shares”

@CZEdwards: “Wow, who could have guessed that vindictive, boozy dudes would start using the court to punish their exes?”

@Diya_lovesBP: “Brad Pitt asking for a trial by jury. Look at how Johnny Depp has inspired the likes of abusers like him and Marilyn Manson”

@_Moi_angie: “I wonder why Brad  Pitt didn’t want a trial by jury with their custody battle. He even blocked the 3 children to testify in court even if they wanted to be heard. Right after their separation, he didn’t allow them to be represented by their own lawyers”

@bogunacorn: “After years of legal fighting post-divorce, suddenly Brad Pitt accuses Angelina of defaming his winery and wants a jury trial about it. I think we all collectively invite him to try it. Jolie has a lot more social capital than Heard”