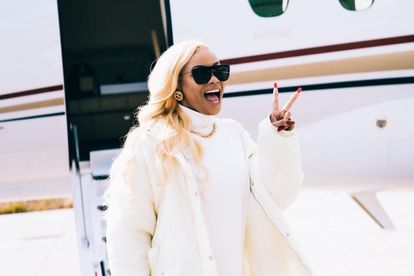 Media personality Bonang Dorothy Matheba confirmed that she has relocated to New York City to her 4.8 million twitter followers on 28 May.

Just over a week ago the television presenter jetted off to New York City without letting her fans know why she was there. She posted a video of herself getting her COVID-19 vaccine on her Instagram Story that is no longer available.

In the video, the nurse is seen lifting up Bonang’s sleeve and prepping her arm for the vaccine, she then says,

”That’s good, relax that arm. Alright, here we go. One small step for mankind”, just before injecting Mzansi’s Queen B.

Bonang later posted another video on her story where she is seen saying “yay, we did it,fantastic,” as she then showed her followers her current view of New York.

She later revealed that she relocated to New York City on Twitter when a fan asked where she was.

Bonang’s retweet has since been removed. Another tweep responded to Bonang’s relocation, asking if she really relocated without saying goodbye.

“Say goodbye to who?!,” Bonang replied.

Bonang’s team confirmed to IOL that Bonang did in fact relocate to New York however, she will be based in both New York and South Africa.

On 16 May Bonang filed a defamation suit against upcoming YouTuber Rea Gopane after he claimed that she introduced her ex-boyfriend AKA to cocaine. This was said whilst AKA was currently facing abuse claims after a video of him breaking down a door to get his traumatised fiancée Anele “Nelli” Tembe went viral.

Tembe plunged to her death from the 10th floor of the Pepperclub Hotel in Cape Town on 11 April.

Bonang was not impressed by her name being dragged into conversations of a young girls death and she clapped back with a R500 000 lawsuit against the YouTuber.

A fan recently asked Bonang if she had received her money and she responded saying he was served with a summons a few days ago and she’s ready to take it to the next level.

“He was served a summons a few days ago… now; Gear 6!!” wrote Bonang on Twitter.