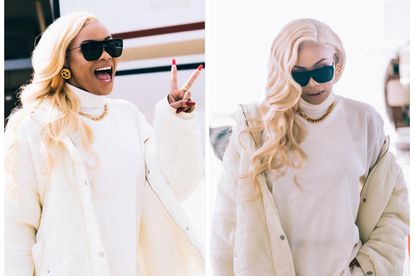 Bonang Matheba has revealed that she once recorded a song with friend Bongani Fassie.
Image via Twitter
@bonang

Bonang Matheba has revealed that she once recorded a song with friend Bongani Fassie.
Image via Twitter
@bonang

But “singer” is something many fans – including the B-Force – was not something we anticipated to be on B’s resume.

To our surprise, B revealed that she actually had recorded a “banger” song with the help of close friend Bongani Fassie.

ALSO READ: ‘Why post it on social media?’ Bonang tells fans to ‘find’ driver after crash

‘I ONCE RECORDED A R&B HIT’

After a clip of fellow Live AMP co-hot Sizwe Dhlomo belting out a love song had tweeps swooning, Bonang revealed that she too was an avid singer.

She posted in a series of tweets:

“…I once recorded an R&B HIT with Bongani Fassie… I wonder if he still has it!”

“I spent all my time with Les & Bongz. Twas bound to happen”

When Bongani Fassie revealed that he did not have the track on hand and invited her to rerecord it, Bonang replied: “No! Another banger?! The pressure”.

Bonang eventually resigned to the fact that she was not a singer.

She added: “Unfortunately my hit song is no more! A sad day indeed. Askies guys… I’m not a musician, so maybe this is good!”

But whilst many fans are skeptical if Bonang can indeed sing, there are clips of her playfully belting out some notes in clips posted on Twitter.

But is it proof that she can sing? Watch and decide for yourself…