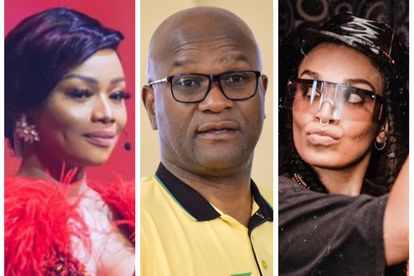 Whilst they remain sworn enemies in the entertainment industry, Pearl Thusi and Bonang Matheba can agree on two things: the love for the Banyana Banyana soccer team and their disdain for Minister of Sports, Arts and Culture Nathi Mthethwa.

Following their win, the media personalities took to their respective Twitter accounts to congratulate the South African women’s soccer team – and throw shade at the minister.

This, after Mthethwa tweeted his own well-wishes to the team, amid controversy from his own department.

ALSO READ: Gloves are off: Bonang vs Mthethwa AGAIN over Banyana Banyana

Whilst the minister is doing his best to justify why SA needs to invest millions into projects many deem ‘unnecessary’, many South Africans are calling for an end to gender inequality and a wage disparagement in professional soccer.

According to a report by News24, Banyana Banyana’s players earn about 10 times less than their male counterparts when it comes to match bonuses.

In a Newzroom Afrika interview, former Banyana player Portia Modise once revealed that Banyana Banyana players have to have full-time jobs to financially support themselves.

She said: “Women who play at Banyana level still have other jobs. They have to ask for leave at their jobs to go represent SA”.

He tweeted: “Today’s a historic day for women’s football in South Africa as Banyana Banyana have been crowned the Champions of African football with a 2-1 victory over Morocco in the #Wafcon. We send our felicitations to the new queens of African football, we are incredibly proud of you!”.

Pearl Thusi responded: “Take the money for the flag and arrange a parade. Pay them and invest in women’s football sir. Your tweets mean absolutely nothing to the people your ministry serves”.

Bonang added: “Because NOTHING has been done since 1996! Imagine the nerve! Swooping in to celebrate a VICTORY you didn’t cultivate! Find a new job!”.