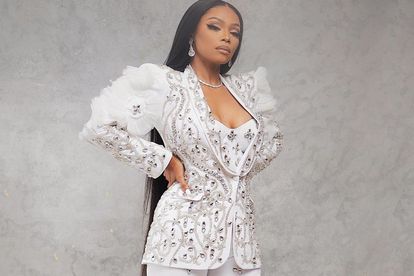 Bonang Matheba was announced as the host for the eighth annual Africa Magic Viewers Choice Awards on 3 May. The 34-year-old has hosted several awards shows and pageants including the Miss South Africa pageant, the MTV Africa Music Awards and the MTV Europe Music Awards pre-show in 2014.

Speaking to Africa Magic on her Africa Magic Viewers Choice Awards debut, Matheba said it has been “a long time coming”.

“It’s always such an honour to host live productions and I think after COVID, we haven’t had the opportunity to be outside to have these big, big productions with live studio audiences,” said Bonang.

“It’s also an honour, Any single stage I get to step on is an honour.”

For the Africa Magic Viewers Choice Awards, Bonang stole the show in four different outfits which were all designed by Nigerian designers.

TAKE A LOOK AT BONANG’S PRESENTING SKILLS AND DRESSES

“I don’t care what happened, Bonang Matheba will always be one of my greatest tv presenters of all time,” wrote one tweep.

“If we haven’t realised how much of a gift [she] is to our South African entertainment industry, I’m afraid it’s too late!” wrote another tweep.

“She commands a strong presence and voice on that stage. Wow!”