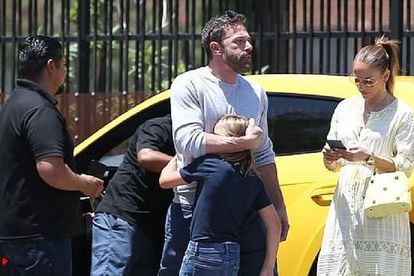 Ben Affleck’s 10-year-old son Samuel crashed into a BMW while in the driver’s seat of a yellow Lamborghini. Image via Twitter @Bestgug

Ben Affleck’s 10-year-old son Samuel crashed into a BMW while in the driver’s seat of a yellow Lamborghini. Image via Twitter @Bestgug

Hollywood actor Ben Affleck’s son Samuel, who is only 10 years old, crashed the Changing Lanes actor’s Lamborghini into a BMW.

According to the Daily Mail, Samuel was behind the wheel of his dad’s car in Los Angeles on Sunday 26 June when he accidentally collided with a BMW vehicle that was parked behind it.

When the incident happened, the toddler was with his father, 49 and his stepmom Jennifer Lopez, 52.

The family was car shopping when Affleck permitted his son to get into the driver’s seat of a yellow Lamborghini Urus, while the engine was running. The publication says it rents for $1,475 (R23 000) per day.

In the video, the boy puts the Lambo in reverse and it appears that’s when it made contact with the white BMW. After the mini accident, the actor is seen comforting his son.

As per TMZ, an employee at the luxury car dealership company said that there was “no accident”.

“When he [Samuel] got into the car, it jerked back and forth,” said the employee.

“We have a small lot and the cars are close. Everybody was OK! They seemed happy and continued to browse,” he continued to explain.

He also expressed that the car company would live to have Affleck and his family back soon.

“The dealership would more than gladly welcome the stars back. Affleck loves cars. We hope they come in again,” he added.