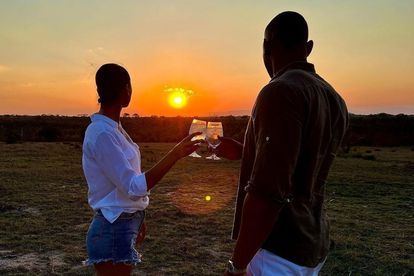 A HONEYMOON OR BAECATION?

Just two weeks ago, on 10 October Dr Tamaryn Green announced that she and Ze Nxumalo held their umembeso ceremony in the Western Cape.

“Woke up on this morning to the sound of rain and I remember thinking this is God showering us with His blessings. It might be a muddy day but so it will be. Then at 11am, just as our event started, the clouds gave way and the beauty of my home town revealed itself as the sun shone down on us,” she wrote.

“I’m so happy to have introduced my new family and friends to Paarl. I could not have asked for a more fun, loving special day celebrating with God at the centre. Thank you to everyone for all the well wishes. We really appreciate it ????????????,” she continued.

Is this their honeymoon or just a “baecation”? Many assumed that Tamaryn married Ze after she announced their umembeso ceremony. However, a umembeso is a process in the traditional Zulu wedding where the groom gives gifts to the bride’s family, following the lobola negotiations. The lobola negotiations took place in June this year.

Therefore, whether the vacation is a “honeymoon” or “baecation” depends on what the umembeso ceremony means in terms customary law.

DOES PAYING ‘LOBOLA’ MEAN THE COUPLE IS MARRIED?

According to Maritzburg Fever, lobola itself is not yet marriage but a process of getting married under customary law.

“It is very important to celebrate the customary marriage after lobola negotiations have been concluded. By merely paying or receiving lobola in full without the requisite celebration, the marriage is not concluded in accordance with customary law, and therefore considered invalid,” said John Manyike, Head of Financial Education at Old Mutual to Maritzburg Fever.

Maniyike went on to say that the way customary marriage is celebrated differs from culture to culture. However, he states that for a marriage to be valid, it needs to be registered at Home Affairs.

“Many couples tend to take a break after the lobola process is concluded to save money for a celebration without realising how crucial it is that a traditional ceremony also takes place as soon as possible,” he continued.

“If the ceremony is not conducted, and the marriage is not registered, the marriage may be hard to prove and may not be recognised under the Recognition of Customary Marriages Act. This means you may stand to lose your claim on any assets you may be entitled to if the marriage fails or if your spouse dies,” he added.

In terms of Tamaryn and Ze, this means that the pair may have gotten registered at Home Affairs after the umembeso ceremony or there may be a traditional wedding to follow.

INSIDE TAMARYN AND ZE’S VACATION

ALSO READ: WATCH: Tamaryn and family groove to ‘Jerusalema’ at her umembeso