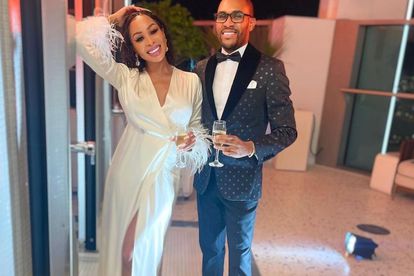 South African actress Khanyi Mbau finally revealed why she left her businessman-boyfriend Kudzai Mushonga in Dubai via an interview on Friday 12 November.

KHANYI MBAU OPENS UP ABOUT HER ‘GREAT DUBAI ESCAPE’

Khanyi Mbau left her boyfriend Kudzai Mushonga “high and dry” in Dubai and hopped on a flight back to South Africa without telling him. The actress has never publicly spoken about why she actually upped and left until her interview on YFM on Friday 12 November.

Khanyi referenced her song about “leaving the man in Dubai” saying that it was a statement of empowerment — not mockery.

“I was grateful to have that platform because I never spoke about this Dubai thing, people saw it as a mockery. But it was actually a statement to empower you and say know your worth. If you not happy in a place, never stay, leave and work things out,” said Khanyi.

She also celebrated that he was able to show his emotions and fight for their love. This follows his several meltdowns on Instagram.

“I also dedicated it to Kudzai for being a man and showing emotions, because men can’t and fighting for the person you love publicly. I had to dedicate it to him because it takes a lot of strength,” she continued.

ALSO READ: ‘Real Housewives of Dubai’: Tweeps ‘only watching if Khanyi is there’

The actress went on to say that she left to protect her mental health.

“I wasn’t emotional at all, it was just a choice of I need to protect my mental health right now, I can’t function in this environment, let me go home,” she added.

In August, Khanyi left her boyfriend in Dubai and got on a flight back to South Africa without telling him. He thought she was missing and went on an anxious social media spree only to find out she was safe and sound and needed some space.

Khanyi seemed to have come to South Africa to refill her money bag as she did appearances, created a song and struck brand deals. A month later she returned to Kudzai in Dubai. This “Dubai drama” won her an award for Drama Queen of the Year at the Feather Awards.