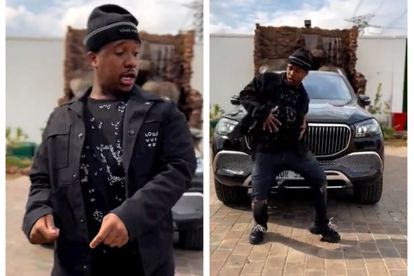 Andile Mpisane has dropped his latest track Makhwapheni as well as a dance challenge for cash.
Image via Instagram
@andilempisane10

Andile Mpisane has dropped his latest track Makhwapheni as well as a dance challenge for cash.
Image via Instagram
@andilempisane10

Andile Mpisane is back with another single, and another dance challenge. The Royal AM chairperson released Makhwapheni on Friday, his first single under the record label DefJam Africa.

To hype up the release of his single Makhwapheni, Andile Mpisane offered fans cash to do a dance challenge to the tune of his new track.

Sharing a post on Instagram, he wrote: “Giving away R1000 to 10 people for the Makhwapeni challenge. Tag me”.

In the video post, Andile Mpisane is seen showing off his best dance moves in front of his Mercedes Maybach GLS 600.

The luxury car – worth over R2 million – is seen bouncing up and down, like something off  the set of Boyz N The Hood.

On Twitter, fans gave their verdict on both Andile Mpisane’s new track and his dance challenge.

But the 20-year-old was harshly judged by tweeps who accused him of trying to “buy” fans to like and promote his song.

@SimthoBiyela: “Not Andile Mpisane bribing us to do a wack dance challenge with 10k to promote his wack song”

@prosperous_emii: “Andile has been trying to get his new single to trend. He’s asking for attention guys”

@SimthoBiyela: “Can Andile Mpisane just stick to eating MaMkhize’s money. The song is wack, the dance is wack. Now he wants to bribe us with 10k?

@Maps1118: “Whoever told this boy that he can sing and dance, won’t see the heaven’s door”

Some make music to earn a living he makes music as a hobby not talent,no charisma in “Simon Cowell’s voice” pic.twitter.com/JKDiwY6RsB