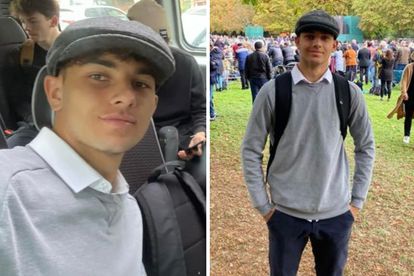 Fans of Amor Vittone have commented how her son Jordan bears a striking resemblance to his late dad, Joost van der Westhuizen.
Images via Instagram
@amor.vittone

Fans of Amor Vittone have commented how her son Jordan bears a striking resemblance to his late dad, Joost van der Westhuizen.
Images via Instagram
@amor.vittone

Amor Vittone is one proud mama, showing off pics of her kids with her late husband Joost van der Westhuizen, any chance she can…and rightfully so!

Both son Jordan and daughter Kylie are successful sportsmen, following in their famous father’s footsteps.

Whilst 14-year-old Kylie is an award-winning show jumper, 18-year-old Jordan is currently abroad playing for a Spanish soccer youth league.

In one of her latest posts, Amor Vittone shared pics of her son Jordan joining a crowd of royal fans who witnessed Queen Elizabeth’s funeral procession outside Windsor Castle on Monday.

She shared: “The Reading Football Academy, travelled to London, for the State Funeral of Queen Elizabeth II. Jordan sent me these pics, and what an honour it was for him”.

But whilst many claimed that the opportunity was likely one he would never forget, others commented on the resemblance to his Springboks dad Joost van der Westhuizen.

In 2017, Joost lost his battle with motor neurone disease at the age of 45 years old. At the time, Jordan was just 13 years old.

But with his dark hair and hazel eyes, Jordan is undoubtedly his dad’s double!

And he’s one step closer to his goal. According to Amor Vittone, Jordan is keen to one day play for his dream club, Liverpool.

The Citizen quotes Jordan as saying: “The saying ‘You will never walk alone’ is a saying that is very close to my heart, and it is also Liverpool’s anthem. That is why I support Liverpool in the Premier League. I believe whatever you do or wherever you go, you are never alone because God is with you”.