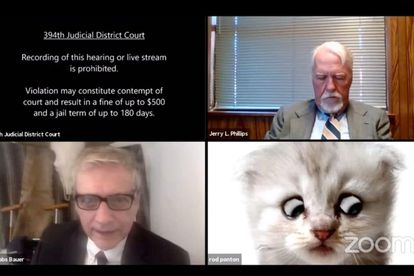 A video of Rod Ponton, a county attorney in Presidio County, Texas, being unable to figure out how to turn off the cat filter on his Zoom call during a hearing has left the internet in stitches.

A Zoom video of the hearing, that took place on Tuesday 9 February 2021 in Texas’ 394th Judicial District Court, was hailed across the internet as an instant classic, in the rarefied company of videos like the BBC Dad. According to The New York Times, the video offered an injection of harmless levity when many people are experiencing a rough time — and Mr Ponton took it in good spirits.

“If I can make the country chuckle for a moment in these difficult times they’re going through, I’m happy to let them do that at my expense,” he said in a phone interview wit the publication after the video went viral.

“Mr Ponton, I believe you have a filter turned on in the video settings,” Judge Roy Ferguson, presiding over the case, begins by telling Mr Ponton in the video recorded on Zoom.

“Augggh,” an exasperated Mr Ponton responds, as his kitten face looks forlornly at the corner of the screen. “Can you hear me, Judge?” he asks, although the audio was never at issue. H. Gibbs Bauer, another lawyer on the call, puts his glasses on and leans forward to better examine the wonder on his screen. He adjusts his tie, as if subconsciously aware of his supporting role, but keeps a straight face. Another man, identified as Jerry L. Phillips, were seemingly unfazed by the cat.

“I don’t know how to remove it,” Mr Ponton said further. “I’ve got my assistant here and she’s trying to. To get the hearing moving, he offers: “I’m prepared to go forward with it.”

This causes Mr Phillips to look up and, finally, the exchange draws a smile and a laugh from him as Judge Ferguson responds: “I can see that.”

Going viral thanks to Zoom

In the interview, Mr Ponton, who was representing the State of Texas in the case, said that he was using his secretary’s computer and that she was “mortified” by the mistake.

He isn’t on Twitter, and didn’t know he had become an international phenomenon until he started getting calls from reporters barely more than an hour after the hearing ended, he said. The video was on the court’s YouTube page, and Judge Ferguson himself tweeted out a link.