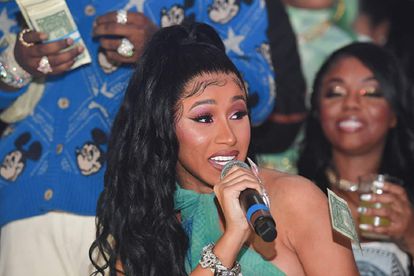 Cardi B attends the Million Dollar Bowl at The Dome Miami on 3 February 2020 in Miami, Florida. Photo: Prince Williams/Wireimage.

Cardi B attends the Million Dollar Bowl at The Dome Miami on 3 February 2020 in Miami, Florida. Photo: Prince Williams/Wireimage.

Look who’s coming to South Africa! Yes, the multi award-winning rapper Cardi B is set to headline the 2020 edition of the hip-hop culture festival Castle Lite Unlocks at the TicketPro Dome, in Johannesburg, on 12 June.

It is reported that Cardi B’s performance will mark the 10-year anniversary of Castle Lite Unlocks. Previous rappers who have performed at the Castle Lite Unlocks concert, include Drake, J Cole, Chance the Rapper, Kanye West, Travis Scott, Post Malone and Meek Mill.

In a statement released on Thursday, 20 February, Castle Lite brand director Silke Bucker said: “Castle Lite prides itself in not only being a market leader in the beer category but also in our commitment to making a positive contribution to African hip-hop culture. We couldn’t be more excited to reveal the multi award-winning hit-maker, Cardi B as this year’s headliner.”

What to expect at the 2020 edition of Castle Lite Unlocks

Apart from various performances [full line-up not announced as of yet], fans were surprised in 2019 with two days of performances, conversations around hip-hop culture with Sway Calloway, and lifestyle apparel sales.

Fans can buy tickets online at their full retail price, starting at R690 per person. Early Bird tickets are unfortunately sold out.

The Bodak Yellow and Money hit-maker is not only known for her rapping skills, but is also a songwriter, television personality and actress. She was born in Manhattan and raised in The Bronx, New York City and became an internet celebrity after several of her posts and videos went viral on Vine and Instagram.

Some of her most iconic lyrics include: “I was born to flex [Yes] diamonds on my neck, I like boarding jets” and “I make money moves”.