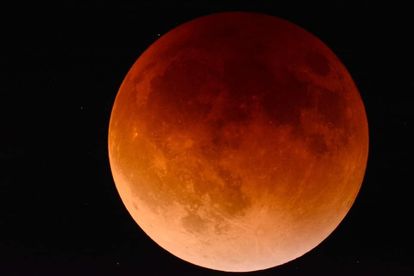 On Friday night, at around 21:30, the moon will slip into the Earth’s shadow, which will cause it to change in appearance in a phenomenon commonly referred to as the “blood moon“.

The name alone should give you an idea as to which colour it will assume for a brief period, and South Africa should get a decent glimpse of the rare phenomenon which last happened in 2011.

Can you see the blood moon if it’s cloudy?

There are a few parts of the country which will not be able to catch the full might of the blood moon, due to overhead conditions not playing ball.

Certain parts of the Western Cape, along with the coastal belt in the Eastern Cape will not be so lucky, as there is some cloud cover forecast. However, the inland will likely get no such interference from nature, as its clear clouds all round.

There are, however, a few ways you can still catch the blood moon in its full glory.

Your best bet is driving to a new location – which could be a bit of a schlep and a bit costly, given the fuel prices in South Africa these days. But if finances are no issue and you MUST see the eclipse then, by all means, make that engine purr and feast your eyes.

Some alternatives when there is some cloud cover

Another option is to look down instead of looking up… Yes, you read right.

You will not be looking at the moon itself, but you will get a much better view of its effects on nature than those who will be straining their necks gawking at the splendour of the eclipse.

Plants will either open up as if it’s a sunny day or close as if its sunset.

Another option is to scour the net for a live stream. It won’t be the same as viewing the thing with the naked eye, but neither will looking at plants opening up.

You could get a closer, clearer picture of the moon’s activity through the net, which certainly beats hoping that the clouds blow over in time for you to catch a glimpse of the action.

As a last resort, you can wait until 2029 – provided your eyesight is still in tip-top shape – which is the next time this rare occasion will take place… or just cross your fingers.ke place.