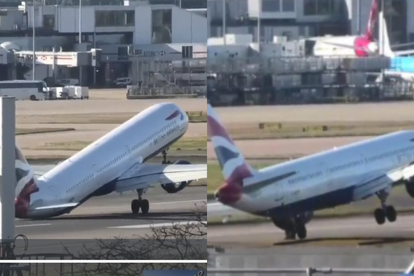 This plane struggled to make a proper landing. Images via Twitter: @bigjettvlive

This plane struggled to make a proper landing. Images via Twitter: @bigjettvlive

A short while ago, a British Airways plane made headlines after one of its doors was ripped off shortly after passengers disembarked at Cape Town international airport. It appears it isn’t the best time for the British planes after strong winds once again got in the way of them making a nice safe and secure landing.

A scary clip has been shared online of the captain struggling to safely land the plane because of the incredibly strong winds.

Once you’ve gone on one or two airplane flights, it pretty much starts to feel normal and not at all scary as it is the first time.

However, one always has a little fear in the back of their minds when they consider all of the things that can go wrong while one is thousands of kilometers above the ground.

A short video clip of a British Airways plane struggling to make a safe landing because of strong winds was just shared online and let’s just say, old fears suddenly became new for many people.

The incident reportedly took place at Heathrow Airport in London.

The clip was shared on Twitter by @BigJetTVLIVE and captioned:

“A321 TOGA and Tail Strike! A full-on Touch and go, with a tail strike! Watch for the paint dust after contact and watch the empennage shaking as it drags. The pilot deserves a medal! BA training could use this in a scenario – happy to send the footage chaps.”

Here’s what the net thinks!

“Oh man, imagine being a passenger on the left side! Ya know, there’s a good chance someone on the aircraft took a video!”

ALSO READ: Flight tickets between UK and SA can now cost you as much as R65 000