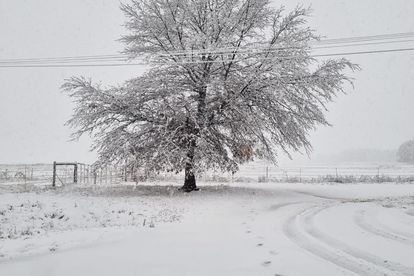 It may be time for the Benn Family in the Western Cape, who posed in their swimsuits while braaing in the snow, to get out there again.

Little over a month ago, the Benn family made the news when getting into their SA swimwear for an icy braai while South Africa had its previous sprinkling of snow.

For the third time in the space of two months South Africa is witnessing significant snowfall in numerous parts of the country.

The SA Weather Service issued warnings for snow over the high lying areas of the Eastern Cape, the extreme western and south-western high ground of KZN (Drakensberg areas) and the extreme eastern parts of the Free state from yesterday.

SNOW IS A NOVELTY

Several parts of South Africa have already been covered with sprinklings of snow . For most South Africans snow is considered a novelty since it is not seen often in our mostly sunny climes. When there is significant snowfall many snow-seekers hop into their cars and travel to areas where they can find snow.

While bringing much-needed rain to numerous parts of South Africa, there are also reports of expected snowfall to mountainous areas along the borders of Lesotho and KwaZulu-Natal, as well as, in the Free State and the Eastern and Western Cape.

For those who are eager to get out there and see the snow, there are a couple of places which are already experiencing snowfall.

There have been recent reports of snowfall in the following parts of South Africa.

Mountainous parts of the Western Cape have reported snowfall on 12 August. The peaks of the Keerom and Brandwachtberge near Worcester have been snowcapped since Thursday 12 August.

There have also been reports of snow in areas along the Garden Route. Snow can be seen on the Outeniqua Mountains located near George.

The Sneeuberg Mountains in the Eastern Cape have taken on a winter wonderland appearance with heavy snow having fallen on Friday 13 August.

The Lootsberg Pass situated in the Sneeberge, between Graaf-Reinet and Middelberg looks something like an Alpine setting after recent snowfall. The pass is 1781 metres above sea level.