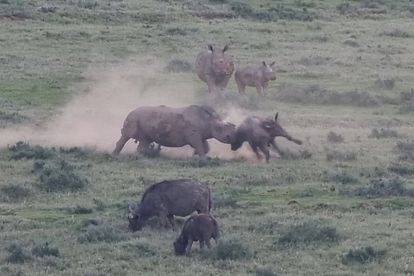 Safari-goers were in for a treat when a buffalo and rhino ‘locked horns’ in the Eastern Cape. Image: kariega.game.reserve
/Instagram

Safari-goers were in for a treat when a buffalo and rhino ‘locked horns’ in the Eastern Cape. Image: kariega.game.reserve
/Instagram

A buffalo in South Africa refused to stand down against a white rhino three times its size – despite getting charged and hoisted off the ground.

Rhino and buffalo standoff in the Kariega Game Reserve

The video – shared by the Kariega Game Reserve on Instagram – has made headlines all over the globe.

According to the New York Post, safari guide Wayne Howarth stumbled upon the heavyweight showdown on 23 September while leading a safari through Kariega Game Reserve in the Eastern Cape.

“In my 11 years of being a guide at Kariega, I’ve personally never seen this happen before,” Howarth told Kennedy News and Media.

The wildlife expert says he believes the fight was sparked by a female rhino leading a male past a herd of buffalo.

“One of the buffalo bulls headed too close to the female rhino and her baby and this sparked the battle,” said Howarth.

The rhino – which is estimated to weigh around 2.5 tons – can be seen locking horns with the buffalo. At one point, the rhino runs its smaller foe across the plain and lifts it partway off the ground like a defensive lineman.

“The brave buffalo continues to go head-to-head with its oversized adversary,” the publication writes. “Prompting one onlooker to exclaim, ‘The buffalo is not giving up’.

“Then, apparently shocked at the brawler’s boldness, the rhino starts to back off as other members of the buffalo herd begin to approach it — think freshmen students rushing to the aid of their friend who’s getting bullied by an upperclassman.”

The size advantage of a rhino

It seems that neither opponent was injured during the course of the nearly four-minute scuffle.

Howarth remains unsure “why the rhino backed off, especially due to its size advantage.”

“The sheer number of buffalo in the background could have been intimidating for it,” Howarth said. “One thing that crossed my mind was possibly the other members of the herd could have moved in to help and assist the male in the fight.”

He did, however, tell the publication that his guests were absolutely blown away.

“It was incredible to see two of Africa’s ‘big five’ fighting and showing off such power,” said Howarth. “My guests were absolutely blown away.”