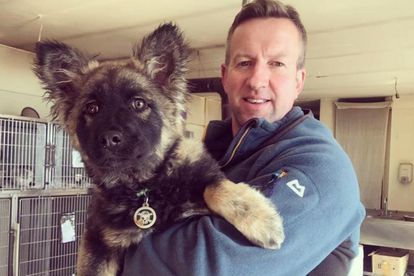 Ex-Royal Marine Paul “Pen” Farthing’s wife, Kaisa Helene Markhus, has revealed that the Nowzad animal shelter founder had been allowed to board a flight out of Kabul, Afghanistan, with 200 rescue cats and dogs as part of his Operation Ark rescue on Saturday 28 August.

According to his wife, the plane will be going to the Uzbekistan capital of Tashkent before heading to the United Kingdom, but they don’t know when.

It was however a bittersweet escape for the founder of the animal shelter as — when he was finally allowed to board a flight out of Afghanistan amid the take-over of the country by the Taliban — he had to leave his staff behind.

As the Taliban approached the city of Kabul on 15 August, a heartbroken Farthing was also forced to put down the animals too old or injured to be taken with them.

Farthing’s wife Kaisa Markhus, who fled Afghanistan for her native Norway last week, said that her husband is “now inside the airport”, according to the Express.

Farthing apparently phoned his wife on Saturday to say that he made it through the Taliban checkpoints and was finally allowed to board a flight with 200 rescue cats and dogs from his Nowzad animal shelter.

“I know Pen had a very hard choice. He faced that same choice when he was inside the airport with his staff and their families on Thursday and the animals and the staff were not allowed through,” said Markhus according to Express.

“So, he went back to the compound to ensure everyone was safe and to discuss with them what to do. They decided he should go to the airport again with the dogs,” she continued.

“He was devastated to leave his staff, but knew that by removing both the dogs and himself, he would remove two big risk factors,” she added.

Farthing also spoke to the Sun about not being able to fulfill his promise to get his predominantly Afghan staff to safety as well.

He said: “It is just so depressing I had to leave them behind. Some of them came with me to the airport but they weren’t allowed to cross the line from Taliban to British control.”

The UK Ministry of Defense confirmed that British soldiers reportedly assisted to load the animals onto the privately chartered flight which cost around $500 000 (R7 364 195).

This follows Farthing and his team’s last-bid attempt to make it out of Kabul airport when they were caught up in the airport bomb blast on Thursday 26 August.

Farthing thereafter revealed that he and his whole team and the rescue animals were 300m inside the airport’s perimeter when they were “turned away” as US President Joe Biden changed the paperwork rules just two hours prior.

UK Defence Secretary Ben Wallace also complained that some of the Operation Ark supporters had “taken up too much time of my senior commanders dealing with this issue when they should be focused on dealing with the humanitarian crisis,” according to BBC.

‘I won’t celebrate until he has landed’

Farthing’s journey to safety has been wrought with challenges and therefore his wife says she will not celebrate him boarding the flight — until he has landed. She added that she was one of the lucky ones to get out safely.

“I won’t celebrate until he has landed. We’re still working on solutions to evacuate the staff,” said Markhus.

“The plane will be going to [the Uzbekistan capital] Tashkent but they don’t know when. He only arrived outside the airport late this afternoon. It was quieter there because of Thursday’s bombings,” she continued.

“I cried as I was leaving Kabul. I was one of the lucky ones,” she added.

Dominic Dyer, one of Farthing’s supporters and an animal rights campaigner, told the Mail: “Pen is OK, but he is very stressed.

“He has no choice but to leave and bring the animals with him. We are looking forward to getting them to the UK.