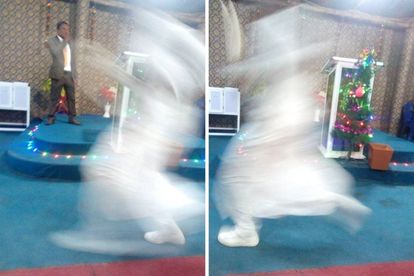 First, we had the pastor who sprayed his followers with Doom, now a pastor from the Republic of Benin in Nigeria is claiming that an actual angel was captured on his camera during a crossover service…and the internet cannot stop laughing!

Nigerian pastor shares photos of ‘angel’ in his church

The pastor – called Ekuma Uche Philips – took to Facebook to share the “event” that took place on 31 December, saying that:

“This is double wonders indeed! An angle (sic) was captured on camera during our crossover night, on Friday 31th December. I have never seen such a thing since l was born. We are in the day of great wonders.”

Of course, this prompted various responses, mostly directed at the angel’s shoes…

“Is like the angel is putting on Louis Vuitton sneaker. I didn’t know that Louis Vuitton also owns a company in heaven,” Festus MaduabuChukwu proceeded to say in the comment section.

The internet weighs in

The post from the pastor on 2 January 2021 is clocking in comments and shares from South Africa and all over Africa. While some users pointed out the “angle/angel” mistake, others were quick to make a joke of the situation.

“We Africans survived many problems, but now our own pastors are going to kill us with laughter,” said Dereje Tadesse.