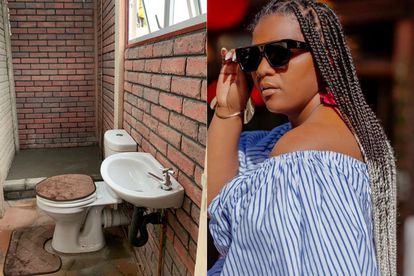 The first of 20 houses were handed over to a family who lost everything in the deadly KwaZulu-Natal floods earlier this year. Images via Twitter @1KZNtvNews @MayibuyeZ

The first of 20 houses were handed over to a family who lost everything in the deadly KwaZulu-Natal floods earlier this year. Images via Twitter @1KZNtvNews @MayibuyeZ

Earlier this year, Royal AM football club owner and businesswoman Shauwn “MaMkhize” Mkhize pledged her support to the hundreds of families whose homes were swept away by the deadly KwaZulu-Natal floods in April.  Almost two months later, MaMkhize handed over the first of many houses and tweeps were not impressed by the quality of the houses.

MAMKHIZE ON LENDING A HELPING HAND

Speaking to City Press in May, MaMkhize said she had already pinned down a piece of land where she will build the 20 hours for the KwaZulu-Natal flood victims.

“I know they are going through a hard time, not having a roof over their heads and not knowing where to go next when they leave the halls.”

The businesswoman added that the project was not about money and just wanted to lend a helping hand.

“It’s not about me, but about those destitute families. I don’t want to hog the limelight for this.”

THE OFFICIAL HAND OVER

On Monday 20 June, MaMkhize and the local government in KwaZulu-Natal handed over the first one to flood victims who lost their home and all their belongings. The businesswoman previously told City Press that the labour was done by prisoners.

“This is part of their internship. [It is a winning model], if you think properly about it because at the end of the project, they are going to be given certificates of completion of work,” she explained.

Images of the homes were shared by @1KZNtvNews on Twitter.

Tweeps were not impressed by the quality of the houses and dragged MaMkhize, specifically targeting the use of certain materials for the project…

“I know people are poor but really people should give something they themselves would accept. This house is definitely a deep freezer, paving as flooring? Slabs with no insulation? Shower yona? Where’s the decency in that kodwa yoh,” wrote another tweep.

“Why does the inside look like outside?” questioned one tweep.