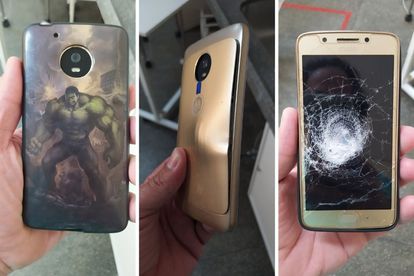 A Brazilian man was recently “saved” when his Motorola and Incredible Hulk-themed phone cover deflected a bullet during an armed robbery.

Saved by the Hulk

According to the New York Post, a tweet recounting the situation currently boasts more than 6 000 likes and is quickly making headlines around the world.

“The bullet ended up in his cell phone!!!” the victim’s physician, Dr Pedro Carvalho, said of the incident, which occurred on 7 October in Petrolina in the Brazilian state of Pernambuco, Newsflash reported further.

The man – who has not been identified – was reportedly accosted by muggers, who shot him before fleeing. Police officers subsequently arrived, whereupon the lucky guy was taken to the University Hospital.

“When they examined the victim’s body, doctors found that the bullet hadn’t even broken his skin,” the publication writes. “Instead, the projectile had grazed the fortunate soul’s hip before bouncing off his Motorola smartphone, which sported a case fittingly emblazoned with an image of the Hulk, Marvel’s virtually invulnerable green superhero.”

Though the man was shaken, he only had pain in his hip area. The patient has since been discharged from the hospital after he only suffered a small bruise at the point of impact.

It is not clear if the robbery suspects have been identified or whether authorities are investigating the case further. The police did, however, confirm that the shot was fired during an attempted robbery in a rural area of the municipality of Petrolina, in the northeast of the country.

Motorola Brasil has since replied to the physician’s tweet saying that “Wow! Moto saved him”. They have since tried to get in touch with the victim and owner of the phone to get more details and maybe offer to sponsor him in one way or another.