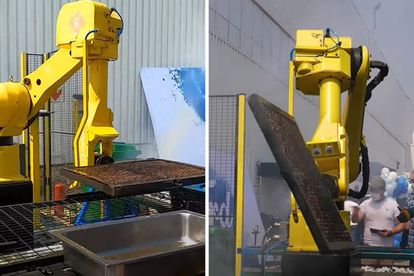 The TCF BBQ (Braai Boerewors Quickly) – can reportedly braai 120 pieces of meat in 12 minutes without breaking a sweat. Image: YouTube/FordSouthAfrica

The TCF BBQ (Braai Boerewors Quickly) – can reportedly braai 120 pieces of meat in 12 minutes without breaking a sweat. Image: YouTube/FordSouthAfrica

While having a braai is probably as South African as it gets, Ford South Africa’s Silverton Assembly Plant decided to “flip the switch” by turning one of its old vehicle assembling robots into an automatic braai robot.

The machine – appropriately named the TCF BBQ (Braai Boerewors Quickly) – can reportedly braai 120 pieces of meat in 12 minutes without breaking a sweat, Ford South Africa said, according to My Broadband.

Ford South Africa went on to share a video of the braai robot on YouTube, which clocked in over 19 000 views as of 17 December 2021.

The abilities of a BBQ robot

The company said that the robot calmly flips and moves grills around with speed and precision — and is guaranteed to be the centre of attention.

“The robot is programmed to place the grill loaded with meat on one of three braai stations surrounding the unit and then turn the grill after a set time,” the publication reports.

The braai robot’s abilities, also include:

Our knowledge of braaing

The idea came after various departments in the company were encouraged to design something unique with scrap materials from the plant for an internal competition.

Claude Roux, area manager from the plant’s trim and chassis and final line (TCF), came up with the idea, saying that “the innovation and curiosity of that small child inside all of us came to life”.

“We took our knowledge of braaing and our understanding of manufacturing vehicles and married the two to create a machine with the ability to pick up and manipulate the meat on a grill.”