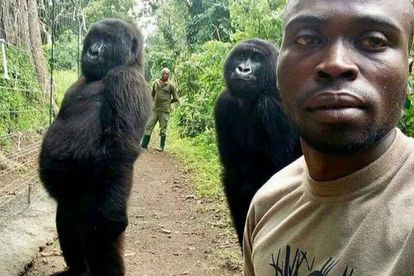 Ndakasi, a mountain gorilla who went viral for posing for “selfies” with a park ranger in Congo, died last week in her caretaker’s arms.

According to NDTV, the 14-year-old gorilla died due to a prolonged illness. She first rose to fame in 2019 for her “selfies” – one of which features her “partner-in-crime”, Ndeze, standing relaxed on two feet, with a cheeky grin. Apart from that, Ndakasi’s life was well documented and her personality was featured in several shows and films, including the documentary Virunga, where she can be seen consumed in laughter while being tickled by a caretaker.

In September 2021, the Virunga National Park shared the news of her death on Instagram, saying that Ndakasi took her final breath in the loving arms of her caretaker and lifelong friend, Andre Bauma. ⁠

Bauma later said in the statement, “It was a privilege to support and care for such a loving creature, especially knowing the trauma Ndakasi suffered at a very young age.” He further stated that Ndakasi’s sweet nature and intelligence helped him relate with the Great Apes and made him understand why humans needed to protect them with all power.

“I am proud to have called Ndakasi my friend,” added Bauma. “I loved her like a child and her cheerful personality brought a smile to my face every time I interacted with her.”

Bauma first met the two-month-old Ndakasi in 2007 after she was born to the Kabirizi group. Virunga rangers found her clinging to the lifeless body of her mother, gunned down by armed militia hours earlier.

With no other family members present, rangers quickly recuperated the infant gorilla and transferred her to a rescue centre in Goma. It is here where Bauma held her all night long, keeping her tiny body tightly against his bare chest for warmth and comfort.

She survived, however, the trauma of losing her family coupled with a long period of rehabilitation meant that Ndakasi was too vulnerable to return to the wild. Along with fellow orphaned gorilla Ndeze, Ndakasi was transferred to the Senkwekwe Center after its creation in 2009, where she went on to live a peaceful life with her caretakers and other orphaned mountain gorillas for over 11 years.

The massacres of Ndakasi’s family and other gorillas in 2007 led Congolese authorities to undertake extensive institutional and security reform within the Park. Thanks to this, the species has grown by 47% from 720 individuals in 2007 to an estimated 1 063 in 2021.

You can read more about the Park over here.