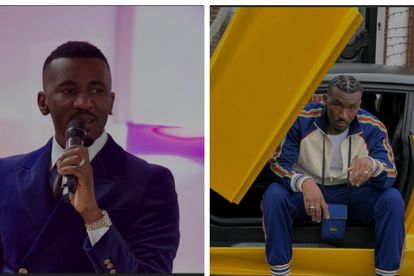 According to controversial Zimbabwean preacher Passion Java, slay queens are necessary to ensure that some marriages do not ‘collapse’. Images via @prophetpassion/Instagram

According to controversial Zimbabwean preacher Passion Java, slay queens are necessary to ensure that some marriages do not ‘collapse’. Images via @prophetpassion/Instagram

MAN OF GOD CLAIMS SLAY QUEENS ARE NECESSARY IN MARRIAGES

Addressing his followers in a Facebook video while he flaunted his luxury car, designer suit, expensive cellphones and Gucci ring, the man of God said that being a slay queen is a calling from God.

Praising the presence of slay queens in marriages, the flamboyant preacher — who made headlines in January for racking up a R1.3 million bar bill at 012 Lifestyle in Pretoria — said that some marriages would have ended if it wasn’t for slay queens.

While many Christian pastors preach against cheating, Java backed his statement with a few references from the Bible, including King Solomon who had 700 wives and 300 concubines, as well as Abraham who had two wives. According to Java, this indicates that sex drive differs from man to man.

In addition, the Zimbabwean prophet said that some slay queens know a lot more about God than some “men of the cloth”.

Although this may be the case according to Java, he warned his followers against those who are possessed by demons to destroy other people’s marriages.

According to Briefly, 34-year-old Java is not only a preacher but a socialite, author, entrepreneur, and music promoter as well.

The publication reports that Java’s claim to fame was in 2013 when he claimed to have miraculously terminated the four-month pregnancy of an anonymous woman.

While Java believes slay queens are necessary to strengthen a marriage, his first marriage to a woman named Yasmin reportedly ended in 2015. A year later, he married Ethiopian-Zimbabwean, Lily Tsagaye in Jamaica.

The couple were set to go their separate ways in 2020, according to an announcement by Java on social media, however, they are still together to date.