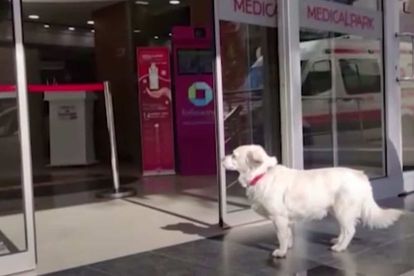 A dog in Trabzon, Turkey spent days waiting outside a hospital for her sick owner after he was admitted for treatment.

Meet Boncuk, the dog waiting for her owner outside the hospital

Of course, the video of the dog waiting went viral after it was shared on the local news.

According to reports, when Cemal Senturk fell ill earlier this month, his dog Boncuk followed the ambulance as he was taken to hospital.

It is said that she patiently waited for Cemal for five days, and even came back when relatives tried to take her home.

Cemal’s daughter, Aynur Egeli, said that despite the amount of times she tried to bring him home, the loyal mutt would always return.

“Boncuk never left my father’s side. “When my father was taken to the hospital, we brought Boncuk to our house here. “When she learned that my father was in hospital, she refused to stay away. She’s been coming here for five days. Even if we take her home, she runs away and comes here, waiting for my father.”

The most loyal dog?

Apparently, Cemal sometimes goes down in his wheelchair to see her while she awaits his return.

When he can’t make it to see his loyal companion, Cemal will occasionally speak to Boncuk from the window of his hospital room. In one of their brief meetings, while doting on his dog, Cemal told local media: “She’s very used to me. And I miss her, too, constantly.”

Luckily, hospital staff have also warmed towards Boncuk and feed the canine in Cemal’s absence.

The BBC thought it best to outline other dogs who went down in history for being considered the ‘most loyal dogs’.