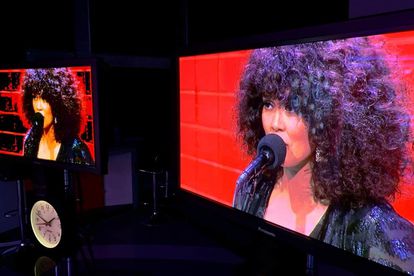 Port Elizabeth singer Belinda Davids, known for her Whitney Houston tribute act, announced that she will release her own Christmas album.

Yes, Davids is set to heat up the Christmas season with the release of her very first holiday album: Belinda Davids – ‘I Love Christmas‘.

According to IOL, recording the 12-track, soulful Christmas album became a special and personal project for Davids when she realised, in recent years, the significance and privilege of being able to spend the festive season with her two children and extended family.

“My touring schedule is so hectic, sometimes I barely have time to breathe, so when I can be at home over Christmas and truly be present with my children it is the greatest gift, and super important to me – it’s the creation of memories,” she says.

The album is expected to drop on Wednesday 20 November – the same day of her much-anticipated opening night concert in Cape Town.

“The Greatest Love of All: A Tribute to Whitney Houston” will showcase with orchestral accompaniment at at the Artscape Theatre in the Mother City until 1 December, and is billed as one of the “most anticipated concert performances of the year”.

The concert will also move to Johannesburg next year.

With this album Davids wanted to give her fans a taste of what her own earliest Christmas memories were like:

“These are the Classics that were played at Christmas time when I was young. I adore Christmas songs, but they are often so cheesy, so when I sat in the studio I wanted to record those same Classics that are timeless and nostalgic, but with a soulful and playful vibe that reflects the diverse musical influences I had in my upbringing. I think we managed to deliver just that.”

Some of the festive season classics to expect on the album include: Silent Night, Joy to the World, Away in a Manager, Do You Hear What I Hear, and When a Child Is Born.

Davids, who now calls Cape Town her home, recorded the album in Johannesburg earlier this year, with studio time juggled between her international touring commitments over a period of four months.

It’s been a long time coming for Davids to finally release more solo music; she was just 16 years old in 1996 when she released her debut album Davids which included the hit single ‘We Go Together’.

The South African previously reported on how Davids wowed the crowd at The Apollo Christmas Show when she sang one of Whitney Houston’s classic hit-songs ‘I will always love you’.

Earlier in 2017 she was invited to perform on Fox TV’s iconic Showtime At The Apollo, and knocked the crowd’s socks off before she received a standing ovation. The show also featured other artists, including Snoop Dogg, DMX and Fifth Harmony, but judging by the crowds’ reaction, it looks like Belinda was a real fan-favourite over the evening.