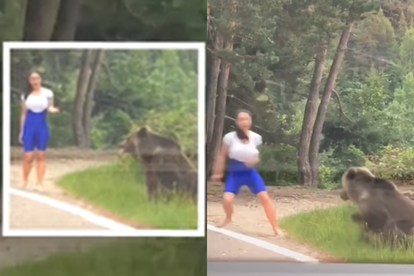 This woman has been called stupid after trying to get a selfie with a wild bear. Images via YouTube @tomonews

This woman has been called stupid after trying to get a selfie with a wild bear. Images via YouTube @tomonews

In movies, bears are portrayed as cute, cuddly and super lovable. In real like however, bears are vicious animals who are not to be messed with. One woman learned this the hard way after she tried to take a selfie with one but ended up almost being a victim of a bear attack.

In a video that has gone viral on social media, the ballsy woman almost gets attacked by the big furry animal after she got way too close to it.

Woman risks her life for a selfie with a bear

Taking photos and selfies with animals is always nice – that is until they become agitated.

Things can quickly go from fun and adventurous to scary and dangerous especially when the animal you want to take a photo with is a bear.

In a video that was shared on YouTube by TomoNews, a brave – or rather foolish – woman can be seen stopping her car near a bear and then jumping out to snap a pic.

After she gets too close, the animal angrily lunges forward and makes an attempt to grab her.

ALSO READ: ‘It needs to eat’: Mixed feelings over clip of motorist saving deer from snake

Fortunately for her, she is quick on her feet and managed to dash away before the bear got his paws on her.

Luckily, the animal appeared to be in no mood to put up a chase and rather watched lazily as she got comfortable in her car and drove off.

Take a look at the clip below:

YouTubers are NOT impressed

The video left many people howling with laughter as they discussed her bizarre decision to take a selfie with the bear.

Others hoped our loud that she had learned her lesson but messing with predators.

“What do you think the bear’s going to do? Bear is just minding his own business and you decide to take a selfie with it? Real genius. Darwin calls it survival of the fittest. Remember the man who was mauled to death after doing the same thing.”