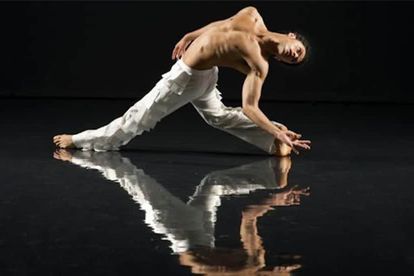 It now stands in Port Elizabeth awaiting a dance centre made out of shipping containers to serve as a foundation of reinforced vinyl, softening young South African dancers’ landings.

‘The Harlequin dance floor is a shock absorber, protecting bones and joints, and it withstands friction and heat,’ says Hurst, 32. He works with close to 100 children in the township of Zwide and Grahamstown at the Ubuntu Education Fund and Amaphiko Township Dance Project and he hopes to return to work with more, across the country once he builds his mobile, travelling dance studio.

‘When music plays and we dance, there are no barriers.’

Hurst started dancing at the Toynbee Ballet School in Port Elizabeth while he was living mostly in the Northern Areas, moving between Gelvandale, Booysen Park, Salsoneville and Salt Lake, the rough, neglected areas of the city.

‘When I was a kid I used to lie under the table and watch feet dancing all day while my grandmother made costumes for a small dance studio in my neighbourhood, The Toynbee Club, which was situated on the outskirts of a very hostile suburb in a disused municipal building,’ he recalls. I did break-dancing and all kinds of sport like football but my heart was set on ballet as it provided much relief from the daily stresses of a chaotic ‘northern areas’ lifestyle.

Later he was to win a bursary to study dance in London, where he excelled. But when he got an ankle injury he was forced to turn to choreography and was nominated to create a work for the Place Prize, a prestigious choreographic platform in the UK with a prize fund of £35,000. Now he both dances and choreographs in Britain and South Africa.

His next dance event here is in London’s Dulwich Picture Gallery, the oldest gallery in the UK, from Sept 6th to 11th at 7.30pm.

Hurst and his company will present a series of spectacular shows inspired by the apocalyptic painting The Deluge by British artist Winifred Knights, whose major retrospective is currently on display at the gallery.

‘My new creation ‘EXODUS’ aims to capture the dramatic tension and energy of the painting, The Deluge, the flood. I want to bring to life the movement captured within the escaping figures in the painting,’ he explains. ’The evening will consist of a series of intimate dance sketches specifically choreographed to exist within different rooms in the Gallery and culminating in a full dance performance where all the characters will flow towards the central space in a physical portrayal of the dramatic tension and energy in painting.’

Hurst and his dancers had similar (sell-out) shows in the gallery last year and this event is filling up rapidly.

‘It’s such a crazy world, you never can tell what lies around the corner,’ he laughs. ‘Not that long ago I had this vision of setting up a dance studio for students and professionals in South Africa, now we have an architect ready and awaiting the finance to build a travelling studio to set the vision in motion. We have the Harlequin dance floor, some sound equipment and an old ballet barre from the previous studio all ready and waiting in South Africa as well as an additional floor donated by Harlequin here in the UK.

‘We’ve had some fantastic support thus far and our first pilot this year was a success but in reality, the project is in its infancy and there is a long way to go. It had to start somewhere and we are on our way to making it happen for all those young kids in South Africa who need a little support and guidance from a team of practising professionals who can guide, mentor and nurture them. I live in hope that some influential sponsors will help us make this Moving Assembly Project a concrete reality by assisting to lay the foundations for a permanent space.

’Meanwhile, I am here in London to create an artwork and perform possibly in one of the most extraordinary dance events of the year. What luck and what a blessing!’

To follow the project’s progress, go to http://www.movingassemblyproject.org or listen to the BBC Radio programme about the transporting of the floor here.