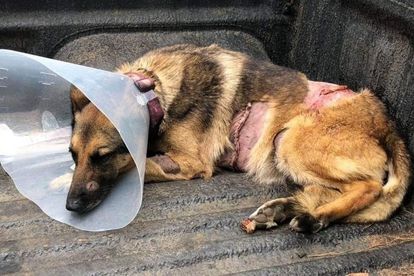 An anti-poaching dog has made a remarkable recovery after being attacked by a lion earlier this year.

The Telegraph reports that the dog, Akita was ripped apart by a lion while out chasing down Rhinoceros poachers in the Letaba section of the Kruger National Park in October and is now recovering from massive surgery. She was airlifted form the park for emergency surgery after the attack.  It was the second time the female Malinois – who has been with the SANParks’ anti-poaching dog unit since 2012 – was seriously wounded on duty. She was also skewered by a kudu bull about 18 months ago.

According to the Lowvelder, Johan de Beer, kennel master at the Kruger National Park’s canine unit posted photos of Akita on Facebook, saying she is “back up and running already” which was “quite hard to believe”.

It is also reported that the eight-year-old Akita might retire after the ordeal.

“These dogs are just amazing…and contribute to many of the anti-poaching successes in the last few years. We could not do without them.”

In 2012 anti-poaching dogs or ‘tracking dogs’ were ‘deployed’ to help rangers in the Kruger National Park stop rhino poaching.

The dogs were placed under the guidance of Field Rangers who were trained as dog handlers.

Head of Public Relations and Communication at SANParks, William Mabasa emphasized the importance of collective efforts in the fight against rhino poaching back then:

”We are doing everything in our ability as SANParks to stop this pandemic that we are currently facing as a country. The introduction of these dogs to our anti-rhino poaching unit is one of efforts that we are putting in place. We hope that our rangers will put them (the dogs) to good use”

“To end this fight, it will take everybody in the country to stand up against rhino poaching. Let us all do something to assist the rangers.”

In 2018, there has been a slight decline in numbers of Rhinoceros poached in South Africa with 508 killed compared to 691 a year ago.