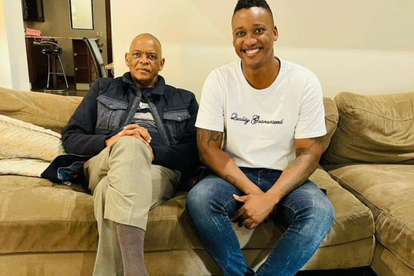 This photo of Ace Magashule and Duduzane Zuma did not sit well with many social media users. Image via Twitter: @MaswaziMhlongo

This photo of Ace Magashule and Duduzane Zuma did not sit well with many social media users. Image via Twitter: @MaswaziMhlongo

Duduzane Zuma isn’t exactly the most popular person in South Africa and has gained his fair share of criticism over the years. The young son of former president Jacob Zuma has managed to ruffle even more followers after a photo of him and corruption accused politician Ace Magashule was shared online.

While some social media users loved to see an older leader rubbing shoulders with an aspiring leader, others shared fears that trouble may ensue from the controversial pair hanging out together.

Duduzane Zuma is dead set on following in his father’s footsteps as a president of South Africa and has been seen doing all sorts of campaigning as he tries to gain more support.

He may have shot himself in the foot after posing with the former Secretary-General of the African National Congress (ANC) who was suspended from this position on 3 May last year.

While the photo of the pair was seen by some as a good thing, not everyone loved seeing the two controversial politicians rubbing their shoulders together.

The snap was shared on Twitter on Sunday 29 May by a user with the handle @mswazimhlongo with the caption:

“Secretary-General of the ANC Ace Magashule together with Chairperson of Ward 11 in Ethekwini Duduzane Zuma. Seems to me that more and more elders are warming up to the idea of getting behind a youthful candidate who will usher in a new era and take South Africa into the future.”

“Ace is out & tired & irrelevant to current SA problems. Duduzane has to hire brains to advise him on a new directions not hold or associate with past failed things”

“I read the comments; you are alone in that Titanic and it seems your boat is sinking. Is it time to find a new horse to bet, maybe a horse outside of the ANC?”

“Just imagine these two in power, our country will be finished.”