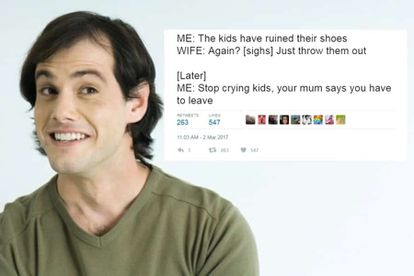 Some men just don’t grow up – and we’ve got the Tweets to prove it.

We know by now that men are from Mars, but it seems married men are from a planet of their own. And a funny one, that is. They either entertain or annoy their better half, which is according to Twitter users, just hilarious.

Even if you’re not married, you’ll still appreciate these men winning at life and marriage!

ME: The kids have ruined their shoes
WIFE: Again? [sighs] Just throw them out

[Later]
ME: Stop crying kids, your mum says you have to leave

Me: I don't have time to play right now

Wife: Take out the trash

Wife: It's like every man on earth has to share one brain
Me: [can't think of a good comeback because it's not my turn to use the brain]

4. When they take things too literally:

Wife: can you pick up milk?

Me: [lifts gallon] yea it's easy

Wife: I mean from the store

Me: I would imagine it weighs the same there too

5. When they agree to keep the peace:

FRIEND: what was the best day of ur life
WIFE: our wedding day
ME (thinking of the time the Coke machine gave me 2 cans instead of 1): same

ME: honey, it's really muggy out today
WIFE: if I go outside & all our mugs are on the front lawn, I'm leaving u
ME: *sips coffee from bowl*

7. Even at the therapist’s office:

therapist: so why do you want to end your marriage?

husband: divorce is strong with this one

8. Always doing what they’re not suppose to…

wife: Why is your back all scratched up?
[flashback to me chasing a raccoon after she told me to leave it alone]
me: I'm having an affair

9. Because grown ups can do what they want:

[restaurant]
son: Can I have my toy back?
wife: Not right now, it's keeping him quiet
me *playing with his dinosaur*

ME: Cant sleep. Theres too much going on in the world
MY WIFE: Whats bothering u?
ME: If Garfield didnt have a job, why did he hate Mondays?

My wife said I need to grow up. I was speechless.

WIFE: you forgot to run the dishwasher again, didn't you?

ME: [drinking milk from a flower vase] no, why?

WIFE: you didn't use my shampoo again did you?

ME: *shakes my head no but my lustrous hair gives me away*

16. You’re not going to believe this…

WIFE: Don't go into the ball pit with the kids. You always lose your keys.
ME: *already in the ball pit* You're not going to believe this.

17. When the wife sees the internet history:

Wife: Where are you
Me: The store
W: Don't lie to me
M: Wh-
W: I saw the internet history
M: *hangs up* pic.twitter.com/CbhMqKVGkq

THERAPIST: what's the problem?
WIFE: he replaces words with animal names just to annoy me
ME: I don't do it on porpoise

Me: I already have one of those. It's called a w-

Me: It's called me

[phone]
WIFE: Where the hell are u?
ME: Well…u know that shop where u saw that ring you love
W: OMG YES
M: I'm catching Pokemon near there

[Enter restaurant]
WIFE: See if you can get us a table
ME: Ok

23. When they analyze children:

toddler *puts shoe on*
wife: Is there anything he can't do?
me: Buy beer
wife
me: Open child proof lids
wife: That's enough
me: Math

24. When they’re freaking out about their responsibilities…

FRIEND: do u guys want a boy or a girl
PREGNANT WIFE: we just hope he or she is healthy
ME (rubbing her belly): im actually hoping its a dog

[arriving at church]
WIFE: Don't go taking a nap during the sermon again
ME: *hiding my pillow* The 7th day is for rest, Karen

26. They don’t always know what to say, but when they do…

KID IN PARK [crying] I dunno where my mum's gone to
ME:Oh no
WIFE:Talk to him
M: Hey listen *kneels* don't end a sentence with a preposition

Wife: What are you thinking about?

Me: *pauses daydream about zombie ninjas fighting cyborg Nazis from the future* You.

ME: Or we could talk about the fact that no one likes you, Karen.

[buying a used car]
SALESMAN: What if I told you this vehicle is the Batmobile?
WIFE: We're not stupid.
ME: Hold on Karen, let him finish.

30. ‘Do I really have to see your parents again this weekend?’