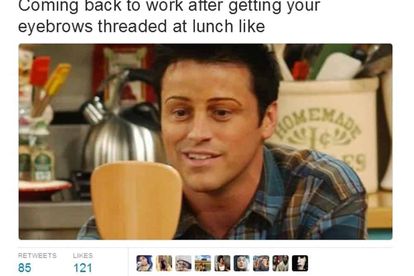 The world is quite interesting when you’re a woman. Some Twitter users decided to share what it’s like being a woman and it is witty and utterly original. Check it out:

boy: i wished girls liked sports
girl: i like sports
boy: oh yeah name the blood type of the seahawks coach from the 1990s

sometimes i forget that men have the right of way on the sidewalk and i feel so silly !!

We asked 500 men what they look for in a woman and then set them adrift on a raft screaming, because just kidding who cares

Hillary Clinton's resting face is "I just sat through 50 years of mansplaining."

If you're not a woman who's laughing while doing yoga, your life is empty & meaningless. pic.twitter.com/qsRgAKCWlE

A cat-caller just said he wants to get "all up in my business" which is great because my taxes are complicated and I could use the help.

1-20: The weight of other people's expectations & judgments

Run down the grocery aisle throwing things into your cart chanting "a woman's right to choose!"

The moral of Beauty and the Beast is that looks don't matter, as long as you're a man.

thank god i found someone who loves me for who I am, who doesn't mind my tetanus or my glibness or my octopus form in which I eat children

Coming back to work after getting your eyebrows threaded at lunch like pic.twitter.com/OVZs2JUoxM

To the small girl who came to the desk with a fistful of correct change clutching Adventure Stories for Boys: YOU CRUSH THAT PATRIARCHY GIRL

I just love that you are a normal, cool girl.

*subtly slides macaroni art of your face back under my chair*

when it's been 20 years and you're still fed up of listening to men pic.twitter.com/TUCV9mFMCp