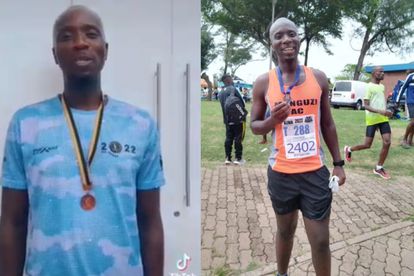 Uzalo actor Cebolenkosi Mthembu, who plays Nyawo in the SABC1 soapie opens up about his Comrades Marathon journey this past weekend, Sunday, 28 August.

CEBOLENKOSI MTHEMBU: ‘IT WAS TOO HARD’

The fan-favourite actor Cebolenkosi Mthembu, who plays detective Nyawo in Uzalo tells Daily Sun that this year’s Comrades Marathon was too hard for him and he managed to finish in 11 hours.

“Marathons are not for the faint-hearted. I had so many stops this time compared to the other years. Perhaps not having enough time to train was the reason.”

Mthembu adds that he was devastated when he heard one of the runners Mzamo Mthembu died in hospital after he collapsed while running.

“This marathon is not easy. What I noticed is that most of the runners were struggling. The two-year gap might be the reason most of the found it difficult to finish.”

The actor, who joined the marathon in 2018 also tells the publication that he stopped training hard for Comrades Marathon due to Covid-19.

“But I promised that next year, I will be first and I will make sure that I finish a bit early.”

Comrades Marathon took a break in 2020 after Covid-19 hid South Africa and the rest of the world.

HIS CHARACTER IN ‘UZALO’

Allowing Cebolenkosi Mthembu to wow viewers with his prodigious vocabulary has since earned him the nickname, Mr. Oxford Dictionary.

The actor tells Drum Magazine that using big and complicated English words instead of everyday English is his way of trying to distinguish himself from other characters.

“But I make sure that even as someone who is supporting, I leave my mark each time I have to speak.

“The words I use, most of them are there in the script. But they are not necessary as they can be simplified.”

He also told the publication in 2020 that he hopes viewers will not only look at what he says; but who he is as an entertainer because he has so much more to offer as an actor.

“I hope the show will give me more opportunities to show that I am an entertaining character.”