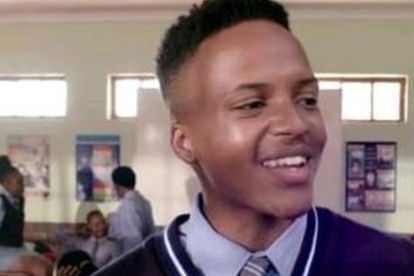 Skeem Saam viewers are exhausted with Paxton Kgomo’s storyline and want the actor Thabiso Molokomme who plays the character to exit the educational soapie.

This is after the Kgomos manipulated their way out of the lie detector test and got Principal Thobakgale suspended from her job.

#SkeemSaam took to social media this week to express their disappointment with Paxton Kgomo’s newcomer storyline acting skills and demanded writers to write out his whole family.

Mr Kgomo revealed to the Turfloop media that Principal Thobakgale (Elizabeth Serunye) is investigating the grade 8 learners and using a lie detector test to find out if they blinded Meneer Magongwa (Putla Sehlapelo).

Fans also wish serial killer Tumishang killed him instead of his kindhearted, beauty queen sister Kelebogile Kgomo who got killed in 2019.

They also want him to mess up, and humiliate his father Mr Kgomo, and his reputation because he enables him and doesn’t see that he’s ruining his son.

“Nkosi from the Queen is annoying mara wabona Paxton from #SkeemSaam he’s on another level, I’m so over him kill him off, please.”

“When is this Paxton storyline ending.”

“I’m so tired of Paxton stupid pranks. I’m sure this storyline is going to drag until December. Yhoooo Ra shwa ke Paxton Bathong.”

“One thing that surely bores me with #SkeemSaam is how they drag a storyline. Yes, we know people aren’t brought to book quickly in real life but damn. Paxton’s storyline is boring now.”

“Is another Boyza, their storyline is boring.”

“What if one of the producers/writers is dating Paxton or has a crush on him? Why are they torturing us like this? ”

“Can the Paxton storyline end already?”