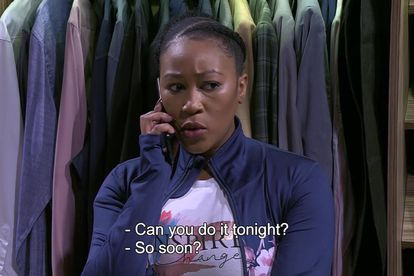 Viewers also wish her unborn baby dead, so that she won’t have a relationship with Lehasa anymore.

Viewers of Skeem Saam hate Khwezi and her unborn baby because they seem to be the only obstacles in Lehasa and Pretty’s relationship.

Fans also hate that she’s dangerous and has hired hitmen to get rid of Pretty (Lerato Marabe) for good and attempted to kill Lehasa when she found out that he’s cheating on her.

The actress Samukele Mkhize, who plays the villainous role of Khwezi was also promoted to the main cast in season eleven which infuriates viewers more because it means that the character isn’t leaving the educational soapie anytime soon.

She’s also unpredictable, mentally unstable, and obsessed with Lehasa (Cedric Fourie) who has fallen out of love with her despite her being pregnant with his first baby.

Team #PreHasa is worried their fan-favourite couple might not make it with her around.

#SkeemSaam is hoping that Khwezi will find out the baby is gone when she and Lehasa visit the doctor tonight, 29 July.

“That poor unborn baby hears lots of scaring things, won’t b surprised if their visit to a Dr brings out some bad news.”

“I think they are going to say false alarm, you are not pregnant after all.”

“Skeem Saam better not drag this love triangle we as PreHasa fans want to see our favorite couple happily ever after. We are rooting for the perfect wedding you Cinderella fairytale osomblief!”

“Khwezi is high on hormones hle 10 weeks and the baby is already kicking.”

“Weitsi, and you only actually feel the kicks from around 20-something weeks. At ten weeks the baby is not even the size of lemon yet.”

SOCCER LIFE: Is Mosimane the next Chelsea coach? [VIDEO]

PUTCO Bus passengers to be stranded for another day

Gallants taken to court for playing Chiefs in Rustenburg – report