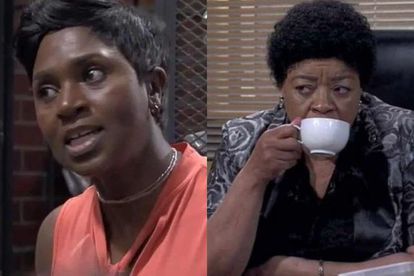 The Skeem Saam August teasers reveal that fan-favourite actress Shoki Mmola, who played the role of Celia Magongwa, a receptionist at Turfloop Hospital will get replaced and Turfloop Secondary will get a new principal when Elizabeth Serunye’s character Principal Thobakgale gets demoted.

Serunye will not be leaving the soapie like Mmola who bowed out of the educational soapie last month (June).

The Skeem Saam actress Shoki Mmola confirmed on her Instagram account that she’s left the soapie after playing Celia Magongwa for ten years, while the August teasers indicate that the much-loved character Principal Thobakgale, played by award-winning actress Elizabeth Serunye might get demoted and replaced by Alfred Magongwa at Turfloop Secondary.

“A strike is looming against Principal and no one can do anything about it. Turf Hospital needs a new receptionist as in yesterday.”

It appears the Turfloop learners and their parents as well as some teachers at the school are fed up with Thobakgale and want her to go.

“The end of an era befalls Turf High to much jubilation and heartbreak. Turf Hospital’s reception post finally gets filled but not by an obvious candidate. “

“A celebration is in the order for the new chief at Turf High.”

‘SKEEM SAAM’: WHO ARE THE NEW REPLACEMENTS?

The teasers reveal that Vice Principal Alfred Magongwa (Putla Sehlapelo) will go for an interview at the district for Thobakgale’s position and that Meneer Manaka (Skhumbuzo Mbatha) might also be interested in the position.

The new principal will be announced towards the end of August by Mr Desando and Mam Evelyn will return to Turfloop Highschool after Thobakgale loses the case.

The teasers also suggest that Melita might replace Celia as receptionist at Turfloop Hospital. Melita is unemployed at the moment after she got fired by Meikie (Harriet Manamela) at her supermarket for having an affair with her husband, John Maputla (Afrika Tsoai).

“A bitter blast from Meikie’s past shows up at Turf Hospital for an interview.”

The teasers also suggest that Evelyn might be another candidate for Thobakgale’s position besides Magongwa and Manaka.

“Evelyn receives an email from the district that might change her life but Alfred doesn’t.”

“Alfred finally receives some good news but he is worried about his competition.”