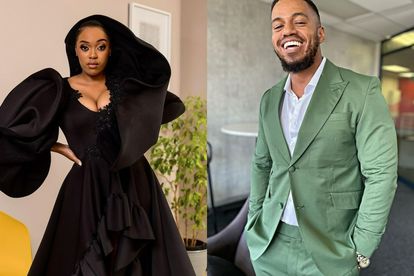 Pretty’s fairytale has been rocked by Khwezi’s pregnancy and Lehasa won’t do something about it. Images via Instagram: @leratomarabe and @cedric_a_fourie

Pretty’s fairytale has been rocked by Khwezi’s pregnancy and Lehasa won’t do something about it. Images via Instagram: @leratomarabe and @cedric_a_fourie

Things have taken a dramatic turn in SABC One’s Skeem Saam with Pretty Seakamela (played by Lerato Marabe) and Lehasa’s (played by Cedric Fourie) relationship and Khwezi is not backing down.

When Pretty decided to tell Khwezi that she [Khwezi] will have to go through her [Pretty] when it comes to the baby, Khwezi decided to drop the Banda surname bomb which left Pretty feeling PRETTY heated.

The second Lehasa stepped into the house, she asked him who Banda was and when he incriminated himself by mentioning Eunice (Pretty’s friend), she knew he was hiding something.

On Monday’s episode (3 October) of the educational soapie, Pretty learned that Lehasa has been lying to her and is not willing, to tell the truth.

Pretty went and confronted Lehasa’s lawyer, Leeto who told her that she cannot have both her law career and a relationship with a criminal like Lehasa so she needs to choose. He then calmly suggested that she needs to break things off with Lehasa if she is serious about her career.

With Pretty studying to become a lawyer and Lehasa being a criminal mastermind, viewers are convinced that Skeem Saam is taking the Ghost and Angela storyline from Starz’s Power.

When she finds out who he is, she tries to protect him to the best of her ability because love conquers all right?!

It seems Pretty and Lehasa are heading in that direction but the big question is, will their love conquer all and is Pretty going to choose a man over her career?

The R74 MILLION lotto winner played via the FNB app