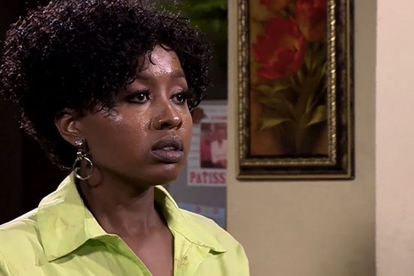 Nonzi (Thandeka Nodada) has broken up Mlungisi’s (Patrick Mofokeng) marriage, chased his wife Zinzile out of her house, and is now after his pension fund from The Newtonian.

She has no idea that Zinzile’s (Gcina Nkosi) name is also on the title deed and that she will be kicked out of Mlungisi’s house when he moves to KwaZulu-Natal.

Patrick Mofokeng who plays the role of Mlungisi will be leaving the show as he’s currently playing the role of Mandla Cele on Mzansi Magic’s Linganishoni.

Thandeka Nodada told Drum Magazine that she loves playing the character of Nonzi because she was always a typecast rural wife or poor wife on previous shows.

Because of the way I look, I am always typecast to be a rural wife or a poor wife wearing doeks and aprons.

Hey, but Nonzi is a different man.

She used to be a slay queen and a plus-size model but now she is older and she is not getting the gigs and the money she is used to.

The actress says she is the complete opposite of everything Nonzi is in real life as she’s married, has children and has a stable life.

Oh! she is so bold, sexy, and flirtatious. She is also an opportunist and willing to do anything to survive.

Even the way she dresses is different from me; she shows a lot of skin. I love her confidence.

The mother of three kids aged 21, 14, and 5 also told the publication that she does a lot of work behind the scenes because the industry is unpredictable.

Our industry can be unpredictable for actors so when you do not see me on your screens, know that I am doing something behind the scenes.

I love acting because you get to step into the shoes of another and walk their journey, and when done authentically and truthfully, it can be beautiful to watch.

I am a casting director and I also produce. Currently, I have a show on Netflix called Uncovered, produced through my company called The Final Chapter.